Orta followed Abadd into a mountainous region, where he finally led her to a ruin of the Ancient Age; the structure seemed to be buried deep in the earth, with only an upper entrance yawning out of the ground below them. Abadd descended into the Ancient facility and Orta followed, but by the time she was inside, he had disappeared ahead of her. Finding herself in a vertical tunnel that extended into the depths of the ruin, Orta slowly continued downwards alone.

She had only gone a little way when she descended through a strange bio-mechanical structure, which seemed to be integrated into the tunnel itself. After she had gone past it however, the structure stirred, coming to life, and it plummeted violently after her; it was apparently a huge bio-engineered creature, known as an Atish, which the Ancients had left behind to eliminate intruders. The dragon managed to stay ahead of the creature as it raced downwards, firing rockets and lasers after them; Orta picked off the rockets with her gun, while the dragon concentrated its own lasers on the vicious sentinel. The Atish was ultimately vanquished, but its enormous body continued to crash downwards after them; only by diving into a small side passage was the dragon able to escape the lethal creature.

Abadd was already waiting for Orta.

Curiously, Orta found that Abadd was already waiting for her in the new tunnel; he told her that this facility was the place where she had been created.

Orta set off after Abadd once more, but again she lost track of him as she travelled deeper into the vast complex. Although the “ruin” had been buried by the ages, its interior was pristine, presumably just as the Ancients had left it; the walls of the great corridors were made of the Ancients’ flawless white materials, and golden machinery could be seen gleaming through the gaps in the architecture. As Orta moved onwards though, the defensive systems of the ruin began to awaken, reacting to her presence; many bio-engineered creatures were dispatched to intercept her, so once again she was forced to fight her way forwards with the power of the dragon. 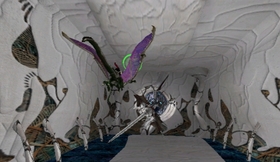 The interior of the ruin has a distinctive white colour.

As Orta descended through a labyrinth of empty tunnels, Abadd swooped in alongside her, and the drone spoke to her about the history of their race. He revealed that drones were not only created as slaves to the Ancients, but by their very design they were unable to reproduce, and their genes could not be passed on or replicated; it was their destiny, eventually, to die without heirs. According to Abadd though, there lived a drone who was an exception to this rule, but he did not elaborate on who this individual might be.

The pair eventually reaches the heart of the facility.

Abadd led Orta to the heart of the Ancient facility, where the very rooms and corridors were mechanical and golden, and vast pieces of machinery continued to turn and function as they had done for millennia. He told Orta that, not far ahead, there was a room that contained the recorded history of the world; it was there that Orta would find the answers she sought, answers about herself and her own past. She flew on through the tunnels, fighting her way through waves of pure-types until she reached a final hallway. There the ruin at last identified the dragon itself, recognizing the creature’s genetic code; the automated system welcomed its “master” in, and activated the Data Transformation Gateway. The dragon and the girl it carried were sucked away from the physical world, their bodies converted and uploaded into Sestren, the Ancient data network.