The Gateway had transformed Orta and her dragon into beings of data, and they now found themselves in a surreal place; the Sestren network was a realm of abstract patterns and burning colours and strange, organic structures that spiralled off to infinity. As Orta descended towards the chaos, Abadd materialised behind her, though his body was different in this virtual place; giant and golden and insubstantial, he went his own way as Orta entered a strange tunnel structure. 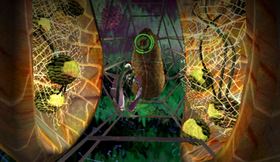 The dragon and Orta enter a tunnel structure.

Although the network had already identified the dragon, it now turned its attentions towards Orta. Virtual antibodies materialised around her and opened fire, but the dragon protected her as it always had. She flew on through the strange organic patterns of the tunnels, and after she fought her way past a shielded guardian-program, an artificial voice told Orta that she had reached a “memory cell”. Orta’s vision blurred, and when she could see again, she found that she was in a different tunnel; here, strange spherical structures floated by, each of which played back sounds recorded from the real world. Orta recognised many voices from her past; voices such as Mobo’s, and Evren’s, and Abadd’s echoed in her ears. As she travelled on through the artificial reality of the network, Orta passed through other memory cells, some of which contained voices that she did not recognise, but which seemed to concern her and her unknown past. 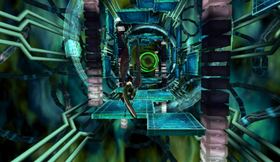 The memory cells reveal information about past events.

And then, Orta reached a memory cell that was different; it contained a visual recording of the past as well as sound. Orta found herself floating before a great golden entity; its body was strangely abstract and symbolic, but something about its shape seemed dragon-like to her.

Orta listened; it seemed that this entity was talking to something that it addressed as its “other half”, though this other half could neither be seen nor heard in the recording. The golden entity was asking its other half why it wanted to return to the outside world when its mission was already completed; the entity warned it that it would not survive out there if it chose to go. However, the two beings seemed to arrive at an agreement; the golden entity said that it understood why the other had to go, and bade it farewell. Now, the golden entity said, it must rest. 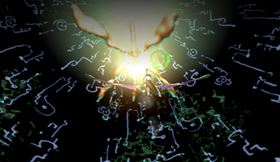 The golden entity turns out to be the dragon's other half.

Although Orta could only hear the golden entity’s words, she became sure of the identity of its companion, its “other half”; it was her dragon. It seemed that, in the past, her dragon had parted company with this strange Sestren-being and returned to the real world. Of course, Orta could not know of the dragon’s history; she could not know that this was the dragon that changed the world so many years ago, the dragon that crushed the old Empire, brought about the Great Fall, fought its way into Sestren and ultimately succeed in deactivating the Towers, the great structures that the Ancients had built to control this world.

For all that time the dragon had been guided by the golden entity, but now the dragon was alone, with nothing but its own wishes to follow.

Once again, the system forwarded Orta and her dragon to another area. Orta found that she was flying through a surreal sky, and in the distance she could make out an Ancient ship, another virtual illusion; unknown to her, this phantom vessel was actually the infamous Shelcoof, the old Tower of the Sky. Virtual reincarnations of Shelcoof’s guardians swooped towards Orta, but it wasn’t long before the network transported her to a different area again.

Orta found herself flying through a monumentally vast tunnel, seemingly without a beginning or an end. In front of her, a strange entity materialised, evidently an avatar of some kind: its graceful shape was almost human in outline, but like so many things in that place it had an abstract and symbolic quality, and it glided elegantly ahead of Orta in the vast space of the tunnel. As the entity began to speak, Orta saw that it was just another recording, but as its words continued, she began to realise something more important, something that changed everything; the words were addressed to her. The message had been left there by Orta’s mother.

Orta listens to a message from her mother.

As the message played out, Orta learned that her mother - a drone - had crafted her from a template made of her own genetic code, and the genetic code of a human. Orta’s mother told her that she had the power to change the world. Although her mother knew that she would lead a life of hardships, she wanted Orta to know that she would always be there for her in memory and in spirit.

The message had finally revealed a fragment of Orta’s past, and the knowledge that she had had a mother made her feel a little less alone in the world. As the recorded words died away, though, Abadd faded into view before her.

Abadd knew all too well that Orta was a drone with half-human genetics, and that she would be able to pass on her genes in ways that a normal drone could not; she was the exception he had talked about, but only now did he reveal his true intentions. After learning that his masters could not be revived, Abadd had sought another way to carry out their will; he had resolved to create a race of drones that could rule the world in their masters’ absence, every one of which would be a replica of himself. However, as he had already revealed, the normal limits of a drone’s genetics made this impossible; to reproduce himself successfully he would need the secrets that lay in Orta’s hybrid genetic code. 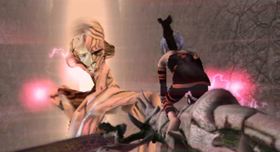 Of course Orta wanted no part in Abadd’s insane plan, but he had no intention of abandoning his objective; if Orta would not come willingly, he was more than prepared to use force. The battle was inevitable, but although Orta and her dragon had been recreated realistically within the virtual reality of the network, Abadd’s gigantic virtual form was far more threatening than his real-world self. Abadd swooped back and forth, disappearing and reappearing and unleashing great blasts of energy at the dragon, but fortunately the dragon’s powers were up to the test; Abadd’s virtual form suffered under the creature’s attacks, and the damage he took seemed to make him revert back to a real, solid form, in which he was more vulnerable still. Abadd was defeated for now, but he warned Orta that she had left him no choice. Immediately a vision of the Cradle flashed through Orta’s mind, and the voice of the system announced that the armament production facility had been reactivated. Orta realised that Abadd had left Sestren to return to the Cradle, where he would gather whatever additional power he could: she asked the dragon to follow him. The dragon cried out, and the system obeyed the command of its “master”, sending them back to the real world as close as possible to the Cradle.