The pair enter a snowy landscape.

Time passed, and the dragon ploughed on through the endless snowy landscape. Although those frozen plains were devoid of vegetation, it seemed that the monsters of the world were quite capable of adapting to such hostile environments; Orta encountered many wandering beasts as she pressed onwards, and unfortunately these mutated species were no less savage than the ones she had encountered before. During her journey through this desolate yet somehow beautiful land, Orta passed many ruined archways and huge pillars that rose out of the earth, evidently the legacy of a sophisticated civilisation that had once dwelt there. 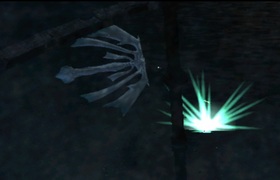 The els-enora attacks the pillars supporting the bridge.

Orta and the dragon eventually reached the shores of a cold sea, where a strange stone bridge seemed to stretch out endlessly over the waters; although the bridge was visibly buckled and worn away, it was solid enough to give them safe passage across. While travelling over this immense structure though, Orta was presented with a formidable opponent; a massive winged monster, known as an els-enora, swooped alongside Orta and began to attack the running dragon. Orta fended it off as best she could, but the els-enora seemed determined to subdue them; it suddenly swooped down and smashed through one of the bridge’s supporting pillars, and the path in front of Orta tumbled into the icy waters far below. The dragon ran on though, leaping over the edge and plunging into empty space; spreading its regenerated wings, the dragon took to the air once more.

Orta realised the els-enora was simply trying to protect her young.

The tense battle continued in the sky over the open waters, and Orta focused her attacks on the creature’s wings, which seemed to weaken the persistent beast; soon it became frantic and almost berserk, and it used up much of its remaining strength as it spewed waves of projectiles in all directions. After the battle, though, Orta began to regret her actions; two baby els-enoras flew towards the creature and circled helplessly around it; she realised that the monster was only a mother defending her young.

Then, without warning, Orta’s vision was lit up as laser fire rained from above, striking the els-enora and its children and annihilating them all. Abadd descended from the sky before her, standing atop his deadly white dragonmare. He asked Orta why she was incapable of destroying the primitive creatures, which angered her; she shouted that they didn’t need to die, and asked Abadd why he was so quick to resort to killing. Abadd seemed to have difficulty answering this moral question, though; his head jerked from side to side in strange spasms as he attempted to reply, but he could not. He explained to Orta that he had come after her because only she could help him complete his mission; asking that she come with him, Abadd rode away over the sea. Unsure of Abadd’s true nature and motives, Orta chose to follow him, if only to know the truth. 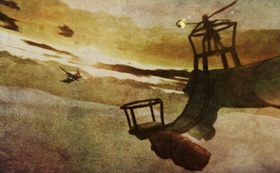 Mobo sees Orta in the distance.

Unbeknownst to Orta, Mobo and his baldor had also survived their crash in the snowy area. After finding and interrogating one of the Imperial soldiers there, he learned that the Empire was chasing the dragon and its rider. Angered by this news, Mobo and his baldor took to the skies once again, defeating many Imperial forces and bio-engineered monsters in their path. He eventually noticed Orta and her dragon flying in the distance. Although he was unable to catch up to them, Mobo was still overjoyed to learn that Orta was still alive. Determined to help Orta in her battle against the Empire, he decided to regroup with the rest of the Wormriders and ask for their aid.