Chapter 18: Return to the Tower

The Tower was still dormant when Edge had travelled through it before, in his futile attempt to defend the massive structure from the Empire; now the Empire was gone, but this descent from the Tower’s summit down through the great monolith was infinitely more difficult. All of the Tower’s deadly security systems and pure-type guardians were fully active now, and they waited in the vast, brightly lit corridors that spiralled down to the Tower’s heart. 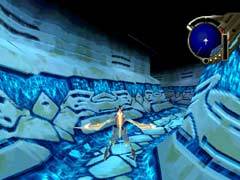 Edge and Azel spiralled slowly down towards the control room.

Edge and Azel persevered, and they managed to struggle their way down from level to level, deactivating and avoiding the security systems as they went. When they reached the lowest floor of the Tower once again, they managed to unlock an elevator that would allow them easy access to and from the outside world. Thankful for the chance, Edge and Azel left the Tower to gather supplies.

There was also one last piece of unfinished business that Edge could attend to: the old Tower of the Sky, Shelcoof, still hovered over Georgius in an almost repaired state. The vessel was completely undefended, and it would of course be wise for Edge to eliminate this weakened Tower before he risked everything and entered Sestren. When he returned to Georgius though, Edge was surprised to find his dragon drawn towards a portal at the rear of the damaged vessel.

Reluctantly, Edge entered into the gloomy interior of Shelcoof; he found himself inside a shadowy corridor that stretched deep into the heart of the Ancient structure. Edge and his dragon explored in the darkness, and it was not long before they were greeted by a strange apparition.

Brilliant shafts of light emerged in the distance, and they rapidly spiralled towards Edge. The light condensed and became a spectral dragon, a dragon in the ultimate Solo Wing form; this apparition looked exactly like Lagi did at the end of Panzer Dragoon Zwei, just before his body passed away. Turning, the ethereal dragon guided Edge towards the room containing the dragon crest, the huge artefact that Lagi’s spirit had entered into all those years ago.

To Edge’s surprise, what now emerged from that crest in a flash of light was a living, breathing creature. He found himself staring at a young coolia pup, which had little wings and a glowing green light in its small throat.

The coolia pup looked and acted exactly like Lagi did long ago, when he was growing up in Lundi’s care; understandably this creature mystified Edge, but he let the playful, happy pup follow him and his own dragon out of Shelcoof. As Edge departed, he used his dragon’s lasers to destroy Shelcoof’s remaining Float Engines. No longer able to keep its ancient bulk aloft, Shelcoof slowly plunged out of the sky, and with a great explosion it was consumed by the dark waves.

The winged coolia pup tagged along with Edge and his dragon wherever they went, flapping through the sky behind them and curling up to sleep with them when they camped. The little creature seemed very happy and content, but it was not destined to merely follow them around forever. 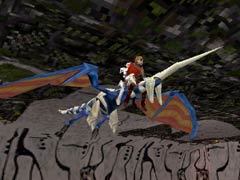 Edge's dragon and the pup became as one, a single Solo Wing dragon.

As Edge returned through the Forest of Zoah he chanced across a silent Ancient Age ruin, and when his dragon activated its ancient technologies a completely unexpected event took place. Edge’s dragon and the winged coolia pup drew close to one another, and a blinding flash of light consumed Edge’s vision. When sight returned to him he found that the two creatures had became as one: their minds and bodies had combined to form a single dragon, which had taken on the ultimate Solo Wing form of old.

When Edge was satisfied that he could be no better equipped to take on Sestren, he returned to the Tower of Uru. At the Tower’s heart once more, Azel interfaced with the systems of the Ancient structure, preparing the data transformation gateway that would take Edge into Sestren.

Azel explained to Edge that she must destroy the Tower after he had passed through the gateway, so that the Sestren AI could not escape into the physical world. Worried for her safety, Edge protested: but Azel’s insistences hurried him on through the gateway, and he left her with the parting message that he would return to her.

Little remained of the mighty Tower of Uru.

Watching him leave her behind, Azel finally admitted to herself what her human emotions had revealed to her: that she had come to love him. She looked on as Edge disappeared into the blinding light.

Upon Azel’s command, immense energies surged up through the Tower. The structure itself began to break apart, and the Tower was consumed in a vast bubble of cleansing energy. When the light and noise at last ceased, the Tower was melted into nothing but wasted matter.