Edge found himself successfully within Sestren, surrounded by a swirling void of glowing colours and nonsensical patterns that existed within the virtual space of the data network. Edge was immediately attacked by five strange simulated beings called Anti Dragons, each of which was a sinister reflection of one of his own dragon’s past forms. 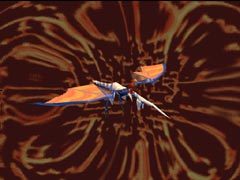 Edge found himself within the Sestren network.

The dragon managed to overcome these hostile program-entities, but when it seemed as if Edge may have found a moment of safety, the Sestren AI revealed itself at last. It appeared in the form of a menacing Solo Wing dragon, but as well as this the AI had another related body, a horrific monstrosity of Ancient Age design that still slumbered in the vast virtual spaces. The Sestren AI spoke to Edge’s dragon then, reminding the creature that it was folly to oppose the will of the Ancients - to defy its own creators - in the way it did.

Strange glowing orbs orbited the body of the Sestren AI, and as Edge looked into them he found himself witnessing the AI’s recorded memories of the past. Edge saw the entity that had always guided and empowered his dragon - the Heresy Program - and he saw that it had originated in the Sestren network itself.

The Heresy Program had long desired to end the dark influence that the Towers had on the world. Edge gazed into these recordings of the past, and he saw how the Heresy Program had been identified as a hostile entity by the Sestren AI; he watched as it was attacked and ejected from the Ancient network so long ago.

Edge saw how the Heresy Program had gone about accomplishing its own mission in the outside world, how it had endeavoured to destroy the Towers with its every action. He understood that the very dragon he rode carried the Heresy Program within its body and mind; the true nature of his friend was at last known to him. 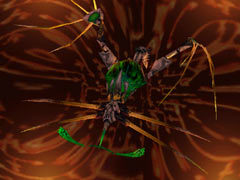 The final battle between the dragon and the Sestren AI commenced; their struggle against one another’s power was immense, and their conflict shook the virtual universe of the network. The Sestren AI viciously tried to annihilate the Heresy Program that had defied it for so long, even dredging up constructs of Shelcoof, the Dark Dragon, Mel-Kava and other hostile beings to aid it in its struggle, pulling them out of swirling chaos that surrounded the warring entities.

In the end even the Sestren AI itself could not destroy or even equal the power of what the Heresy Program had become. It fought on until it was unable to continue, until the fabric of its being was rent apart by the power of the dragon, and then the Sestren AI disintegrated, with something like a scream, into the abyssal spaces of the network.