Chapter 17: The Forest of Zoah

The battle took place above the Forest of Zoah, a vast and verdant expanse that burned under Grig Orig’s chaotic laser fire. The region was infested with the Tower’s pure-type monsters: some of the larger creatures had physically rooted their bodies into the earth where they had stationed themselves, and many smaller pure-types swarmed through the skies. Edge was forced to battle his way through waves of bio-engineered creatures before he could face Grig Orig itself, and end its horror once and for all. 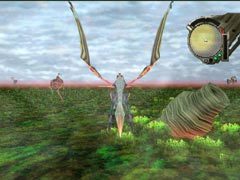 Edge raced towards the ship over the forest of Zoah.

On his return to the Seekers’ Stronghold, Edge was disturbed to find that Azel had slipped away unnoticed while the Seekers were busy defending themselves. The Seekers suspected that she had returned to the underground ruins of Uru though, in order to finish healing her traumatised body and mind; that Ancient bio-engineering lab was in fact where Azel had been created.

Edge returned to the eternal gloom of the subterranean labyrinth, and riding the dragon he was able to reach an area that he could not gain access to on his previous visit. There he found records of the drones that had been created at the facility in the Ancient Age, one of which was indeed Azel. It was not long before Edge located her within the ruins; she had apparently been knocked unconscious, and he ended up saving her from the jaws of a pack of mutated monsters.

Gash had resolved that the Seekers should abandon the stronghold.

When they returned to the Seekers, Edge and Azel attended a funeral ceremony for those who had lost their lives while defending the stronghold. With great regret, Gash revealed that the Seekers did not have the strength to carry out their planned mission; their numbers had been depleted to the point where it would be suicide for them to help Edge reach Sestren. Gash wanted Edge to forget about the whole idea for the years to come, so that the Seeker forces might recover and grow to a point where they could stand against the horror of the Tower.

Although Edge agreed that the Seekers must escape from their present danger, he did not believe that waiting to destroy Sestren was an option; he was confident that his dragon was powerful enough to see him through this mission on its own, and he had resolved to go. To his surprise Azel was equally determined to return to the Tower, to enable his passage into Sestren so that the Ancients’ tyranny could be brought to an end.

No longer playing the role of an obedient servant, Azel had made this decision on her own, because she believed that it was right; she had reached the point where her advanced intellect had given her the power to assert her own will, rather than simply carry out the wishes of others as she had done for so long.

Edge promised Gash that if he survived, he would rendezvous with the Seekers in the valley where the two of them had first met; then he and Azel departed.