The next day, Vaiman gave Edge the key to the locked and forbidden room inside Zoah’s church. Within resided a strange relic of the Ancient Age known as the “Guardian Fire”; this artefact illuminated the whole town at night while it was active, and it apparently kept marauding monsters away from the settlement. Upon touching the relic, a psychic vision of Mel-Kava itself leaped into Edge’s mind; all at once he comprehended the location of the airship, and he returned to his dragon to set out for the ancient vessel. Mel-Kava

The sheer size of Mel-Kava was reminiscent of Shelcoof, the ancient flying Tower, but this ship was only a guardian of the great Tower of Uru. Edge flew around the immense craft, and to disable it he was forced to dive into the darkness of its inner corridors and passageways. The ship’s internal reactors were well defended, and the interior of the ship was crawling with lethal pure-type monsters. 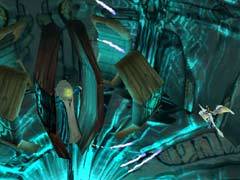 Edge attacked one of the ship's internal defense mechanisms.

After a struggle, Edge succeeded in disabling both of Mel-Kava’s main reactors; the ship slowly fell out of the murky sky where it had circled for thousands of years, breaking up and exploding in a storm of fire. As Paet had predicted, without Mel-Kava’s constant production of fog and mist the skies began to clear.

Unfortunately for Edge, Azel and Atolm had caught up with him at last; this time Atolm was wielding an enormous array of lasers from the Ancient Age, and it seemed that the battle would be to the death. The power of Edge’s dragon had grown considerably since the creatures’ last conflict though, and in the end Atolm could not match what its foe had become; the black dragon plummeted below the clouds, physically breaking apart as it fell.

Determined to save Azel, Edge plunged downwards after the defeated Atolm, and he saved her as her dragon disintegrated. Azel had apparently gone into some kind of coma though, presumably because the psychological bond that she had shared with Atolm had been broken so abruptly; Edge could do nothing but carry her away in his arms.

Edge carried the unconscious Azel away.

As Edge entered the skies above Zoah, he was unnerved to see the Imperial fleet led by the Emperor himself looming into view in the distance; evidently the Imperials had received word of the destruction of their Air Force Post. With one blast from its devastating energy cannon, the flagship Grig Orig reduced the town of Zoah to ashes.