Edge infiltrated the Imperial base during the dark early hours; the metal towers and docking platforms of the sprawling installation rose out of the gloomy waters of the lake, some way from the ruins of Uru. Although the base was heavily defended and Edge was plagued by attacks from Imperial ships, the dragon proved too powerful for them all; Edge blew most of the docked fleet apart, and he also destroyed the base’s main control tower. 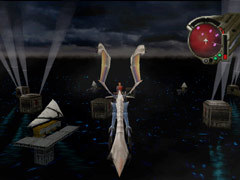 As an act of vengeance, the Imperials launched the most powerful weapon they had available - a huge missile-ship named the Deathmaker - on a course for Zoah. A desperate chase through the sky ensued, and luckily Edge was able to disable the deadly craft before it could reach its destination; the Deathmaker plunged beneath the murky waves, where it exploded harmlessly.

Edge returned to Zoah and reported his success to Vaiman; the politician was pleased, and he told Edge to come back to him the next day when he would be able to grant the young dragon rider his reward. In the meantime Edge visited Paet, who had apparently received an anonymous letter that was addressed to Edge. The mysterious letter asked him to come to Paet’s airship that night; unsure of what to expect, Edge decided to investigate anyway.

To the dragon rider’s astonishment, the letter had been written by none other than Lord Craymen himself. The Black Fleet commander stepped out of the shadows to greet him; when Edge went to draw his weapon, a warning shot from the darkness signalled that aggression would not be wise. Craymen spoke of the reasons for his actions, telling Edge that he was at war with the Empire, and that, regrettably, it had been necessary for him to be ruthless in order to stop the Empire’s plans thus far. 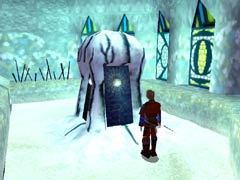 Edge gained access to the Guardian Fire, an Ancient relic.

Edge was still furious at Craymen over the murder of his friends, but most surprising of all was the reason that the renegade Imperial had come to him that night: he came, he said, to ask for Edge’s help. At that point Zastava zoomed down on a transport craft though, and Craymen left with him before giving Edge any real answers to the questions that were forming in his mind.