Determined to avenge Zoah, Edge left the unconscious Azel at his campsite and flew mercilessly into the airborne squadrons of the Imperial fleet. He fought his way through fighters and larger battleships, destroying everything in his path as he searched for revenge, heading ever onwards towards his goal: the enormous flagship Grig Orig, and the Emperor himself. 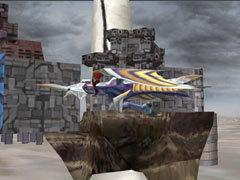 Grig Orig itself was more than a match for the dragon.

When Edge finally laid siege to the flying fortress though, he found that the sheer power of his dragon was not enough to see him through; Grig Orig was all but invincible. Charging up its energy cannon once again, Grig Orig returned fire, and it was all the dragon could do to survive the immense blast.

Before Grig Orig had a chance to move in and finish the dragon off though, Craymen’s Black Fleet swooped into view, descending upon the remaining Imperial ships with all weapons firing. Edge finally had his chance to face Zastava in battle, as while the other Black Fleet ships attacked their common enemy Zastava pursued Edge and the dragon in his incredibly agile fighter ship. 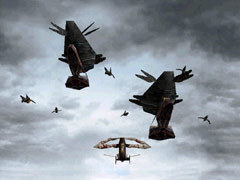 Despite Zastava’s evasive skills that allowed him to simply dodge around the dragon’s attacks, the battle culminated with him being mortally wounded by Edge. Before Zastava flew off towards the Imperial fleet and the battle that he knew would be his end, he told Edge to go to the Tower; Lord Craymen was waiting for him there.