On returning to his campsite Edge found that Paet had come to greet him, and fortunately he had good news. Although Edge had been unsuccessful in finding a passage to the Tower from the ruins of Uru, Paet had discovered what may be an alternate way of travelling to the structure.

The only reason that the Tower could not be reached from the air was that a vast quantity of dense fog surrounded the entire region to the north, which was where the Tower allegedly resided. During his research however, Paet had discovered that this fog was generated by an enormous Ancient airship called Mel-Kava. The Ancients had created Mel-Kava to guard the Tower region, and like many of their creations it seemed that it was fulfilling its duty to this day.

If Edge could destroy Mel-Kava, the obscuring fog would no longer be produced and renewed and he would ultimately be able to fly to the Tower. Although Paet did not know exactly where Mel-Kava was located - as it was shrouded in its own endless mists - he was convinced that the many historical records kept in Zoah’s Holy District would contain further information on the Ancient airship.

When Edge returned to Zoah though, he found that the town had recently been visited by the Empire; evidently they were catching up with the renegade Craymen, and it looked as if they were thinking of taking control of the settlement. Edge was also surprised to find that he had been granted a pass to the Holy District; it turned out that Paet’s father, a ruthless politician named Vaiman, was interested in meeting with him. 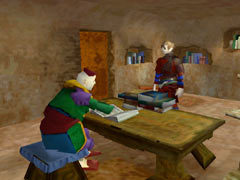 Vaiman was one of the most powerful men in Zoah, and he stood to be elected as the next High Priest if all went well in the coming days. On hearing of Edge’s status as a dragon rider from his son, Vaiman had “prophesised” that a dragon would come to save Zoah from the Empire. Dragons were viewed as divine creatures by the peoples of the Frontier, and they were deeply tied in with their religions; Zoah’s beliefs were no exception.

The Empire had a sizeable Air Force Post nearby that was their base of operations in the region, and Vaiman wanted Edge and his dragon to destroy this installation. If Edge was successful, then Vaiman’s prophecy would be fulfilled in the eyes of the people, and his ascension to High Priest would be all but assured. In return, Vaiman promised that he would give Edge access to all of the town’s archives and records, which the dragon rider needed in order to find information on Mel-Kava. Edge had little love for the tyrannical Empire, so he agreed to the politician’s terms.