Chapter 10: The Underground Ruins of Uru

It was dark in the depths of the ruins, and Edge found that he was apparently alone once more. While he was contemplating his next move though, he noticed an eerie scuttling noise coming to him out of the blackness. To Edge’s surprise, the voice of the girl called out to him also; she told him to stay absolutely still, as the creatures in the oncoming horde were blind. Strange mutated mites swarmed past Edge and away into the darkness beyond, and his life was saved by her advice.

Edge soon found that the girl did not save him out of pure kindness, however. She needed his help, as she had been pinned beneath an Ancient relic; he thought it strange that she was uninjured by this, though. The relic was in fact an Ancient antigravity bike known as a Floater, and following her instructions Edge reactivated it, causing it to lift off of her. The pair decided that they would have a much better chance of getting out of the ruins alive if they worked together, so they climbed aboard the Floater and headed off into the gloom.

The mysterious girl was trapped, and Edge helped her to escape.

Like most of the Ancient Age facilities scattered throughout the world, the ruins of Uru were a shadowy maze of subterranean tunnels that extended deep below the planet’s surface, and the structure seemed to be crawling with monsters. Edge fended them off with his gun and with the Floater’s laser systems while the girl drove the craft; she was evidently a very quiet person, as silent and reserved then as she had been in battle. 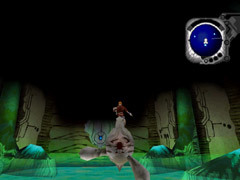 Edge and the girl passed through a huge underground dome.

Strange revelations greeted Edge as they journeyed on through the darkness, as the pair stumbled across a room with what appeared to be deformed dragons hanging from its ceiling. The girl explained to him that they were failed prototype dragons, created by scientists in the Ancient Age: this ruined facility was a bio-engineering lab long go.

Eventually, the two of them managed to open the way to an elevator that would take them up to the surface; before they could reach it however, they had to destroy the nest of a bizarre mutated creature called an energ. Angered, the energ fled, and it soon returned riding upon a truly enormous monster called a basilus, which its species had a symbiotic relationship with. A chase ensued, but Edge and the girl were fortunately able to make it to the elevator in time; it closed, sealing them safely away from the beast, and they began their long ascent away from the darkness.

On the long ride up to the surface, Edge and the girl spoke of many things. She revealed that she had actually been in a state of sleep since the Ancient Age, which is why she was in the ruins beneath the excavation site where Edge had first seen her. She also explained that she was not actually human; although she had a humanoid form, by her own definition she was more like a pure-type monster in most other aspects.

The girl finally revealed that her name was Azel.

Although Edge was not aware of the implications of these things, this girl was in fact a drone, one of the most advanced bio-engineered life forms created in the Ancient Age; she was a living being designed to interface with and operate other Ancient technologies. At last, she also told him her name: Azel.

Unfortunately, their conversation was cut short when the basilus finally caught up with the slowly rising elevator; the monster tore it open with its scythe-like claws, plunging Edge and Azel into empty air and darkness.

As the pair tumbled through space, Edge’s dragon swooped down into the wide shaft and dived alongside them; it caught both Azel and Edge in a pair of protective energy bubbles, transferring them safely to its back. Riding on the dragon, they were at last able to escape up to the surface once again. Morning was rising in purple and violet over the waters of the lake, and with the aid of his dragon Edge was finally able to dispose of the vicious basilus; shortly afterwards, the dragon underwent another physical transformation, becoming visibly more armour-plated.

Azel revealed that her loyalties were unchanged.

Safe at last, Edge and Azel found refuge on a small island that rose sharply above the waters. Perhaps Edge hoped that he had gained an ally in Azel, but now that she was truly free again it seemed that she did not have similar thoughts. Turning to Edge, she told him that if he crossed Craymen again, she would still have to kill him. Atolm reared up to greet her, and Azel climbed aboard his back; reunited, the drone and her dragon soared away into the mists of the lake. It seemed that Azel’s loyalty could not be changed, and Edge was alone once more.