When he arrived at the place that Paet had directed him to, Edge found a vast expanse of ruins that were in various degrees of submergence beneath the clear waters of the lake. By utilising Ancient keys and opening the seals of various ruins, Edge was able to gradually unlock the way into the complex itself. To his surprise, several Black Fleet battleships patrolled the area, which perhaps indicated that he was on the right track; Edge had to fend off numerous attacks as he went about his task. 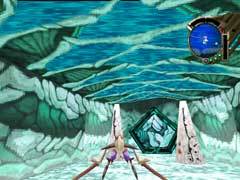 While Edge was operating one of the Ancient locking mechanisms, a sinister laugh floated up to him; turning around, he found himself confronting Zastava, the madman who killed his friends back at the excavation site. Zastava seemed strangely overjoyed that Edge had just activated that particular Ancient relic, but he was able to speed away in his agile fighter ship before Edge could train his dragon’s lasers on him accurately. Edge had more immediate problems too, as it seemed that his actions had disturbed the guardian of Uru, a massive pure-type monster known as Drenholm, from its ages of slumber. 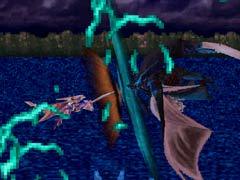 The dragons clashed with immense ferocity.

Edge battled the strange bio-engineered sentinel over the golden evening waters of the lake, and thankfully his dragon prevailed once again; afterwards, Edge was able to finish opening the portal into the ruin complex itself. Before he could enter however, the black dragon Atolm and the mysterious girl who was his rider dived out of the sky and attacked Edge once again. Atolm was considerably more powerful this time, and he was accompanied by various relics that orbited his body and augmented his battle skills.