The following day Edge agreed to give Gash a further lift, this time across the sprawling wastes of the Garil Desert, which evidently stood between him and wherever Craymen had gone. The desert was made up of vast rocky basins, and the arid land was populated by a colourful ecosystem of mutated monsters.

Whenever possible Edge flew underground, travelling through yawning tunnels that had been dug out by the enormous sandworms that inhabited the region. In the end, on Gash’s apparently sound advice, Edge took what appeared to be a good shortcut through some abandoned Ancient Age ruins. 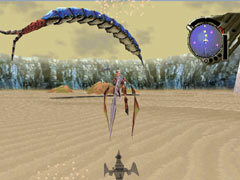 Enormous worms leaped out of the sands.

The ruins lead down into the massive subterranean caverns that stretched beneath the desert. Although they were pleasantly surprised at the lack of hostile monsters, it was not long before Edge and Gash were confronted by an enormous flying beast known as a gigra. This creature was incredibly resilient to damage, and their conflict with it was inevitably a long one.

To Edge’s astonishment, his dragon underwent a physical metamorphosis towards the end of the battle, its body changing and subtly evolving. In its new, more powerful form, the dragon was finally able to overcome the gigra.

When Edge and Gash at last reached the other side of the desert, the Seeker bid his friend farewell. He was extremely grateful for all of the help that Edge had given him, and he promised that if he could ever give the dragon rider any aid in the future, he would gladly do so. 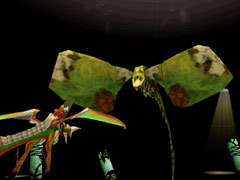 A monster called a gigra attacked the dragon.

Before he departed, Gash gave Edge a pendant that would identify him as one of the Seeker’s trusted friends. He also directed Edge to a travelling caravan that he knew was passing through the region, where Edge might be able to pick up more information regarding Craymen’s whereabouts.