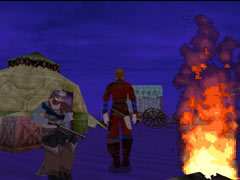 The hunters' leader was a man named An'jou.

The caravan was home to a clan of hunters, nomads who depended on the mutated monsters of the world for their survival. Their leader was a grave and serious man named An’jou, and he revealed to Edge that their caravan had recently been attacked by Craymen’s Black Fleet. It seemed that Craymen and his men had headed away to the north, their destination an area of sea that the hunters referred to as the “Forbidden Zone”. An’jou advised Edge not to go the Forbidden Zone because of the dangerous bio-monsters that roamed the area, but he didn’t know Edge had a dragon to protect him.