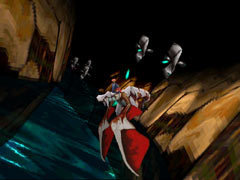 The Ancient Age ruins were flooded.

The endless tunnels and passageways of the ruin complex led ever downwards, their twisting course taking Lundi and Lagi deep beneath the earth. Most floors of the structure were deep in water, and the pure-type monsters that the Ancients had left behind as sentinels thousands of years ago still guarded this flooded labyrinth. The pure-types awoke and gave chase as the pair flew past, spitting lasers at the intruders that had disturbed their slumber.

In the depths of the ruins Lundi and Lagi found an unimaginably vast chamber, a room that cradled a lake between its ancient walls. It was here that they disturbed the greater guardian of the ruins, a hideous pure-type monstrosity that lurked beneath the dark waters; only after a great struggle were they able to escape the ruins with their lives.