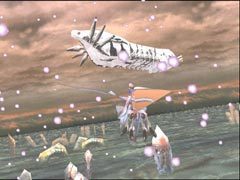 The ruins led all the way to the great inland sea of Georgius, where Lundi and Lagi again caught sight of Shelcoof. Gliding over the strange crystalline formations that littered the surface of the water, the pair relentlessly pursued the flying Tower as it moved ever onwards.

Legions of pure-type monsters had been deployed by the Tower as it passed, and one by one they rose out of the icy waters to attack the dragon. Lagi’s powers had grown considerably though, and the pair successfully battled their way to the flying Tower itself.