Believing that they were being chased by an approaching squadron of Imperial ships, Lundi took Lagi on a detour through a vast and verdant forest. The Empire was really pursuing Shelcoof however, blinded by the unimaginable power that it represented. The forest was not the safe alternative that Lundi had hoped for either, as it swarmed with Imperial fighter ships and the hordes of pure-type monsters that Shelcoof had released as it passed. 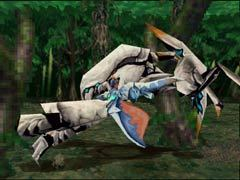 The dragon was forced to battle a golia.

The enormous worm-like mutated monsters that dwelled in the forest burrowed out of the earth and the undergrowth to attack the dragon, and a massive pure-type monster called a golia gave chase to Lundi and Lagi, presenting the greatest threat that they had faced so far. Finally managing to destroy the creature, the pair escaped into the mouth of a ruined structure from the Ancient Age.