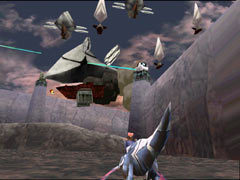 An outpost of the Meccania Federation was located in the canyons beyond the village, and as Lundi and Lagi travelled through this area they found themselves in the middle of the Empire’s planned invasion. The pair were fired upon from all sides as they passed through the chaos of the war zone, and Lundi and Lagi had to destroy many Imperial ships in order to escape with their lives.

The pair succeeded in descending from the mountain canyons to the wasteland beyond, but there they were confronted by an enormous Imperial battleship. Lagi’s power did not fail him though, and he came out of the battle victorious; not only that, but when all was safe he underwent a physical metamorphosis, subtly changing his shape and becoming more powerful. This was only the first of many transformations that Lagi would undergo in the time to come, and he would become a more powerful kind of dragon with each successive change.