Night had closed in by the time the pair reached the bottom of the slopes, and near the entrance to the wasted village Lundi noticed a gun from the Ancient Age lying in the dust; he picked it up as he and Lagi passed, knowing that he would need a weapon for the battle to come.

With volleys from this gun and bursts of lasers, the pair fought their way through the lesser pure-type monsters that Shelcoof had unleashed. It seemed that there were no survivors to be found in the village however, as only scorched ruins and lingering fires remained. 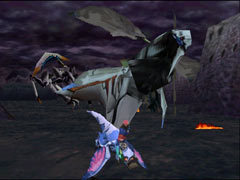 Lagi was no match for the Guardian Dragon.

The pair fought their way towards Shelcoof itself - Lagi desiring to fulfil the mission that had been given to him, and Lundi desiring only vengeance. Shelcoof was equipped to protect itself against greater things than Lagi, though; as the pair at last neared the flying Tower they were confronted by the dragon that was its protector. This creature, known only as the Guardian Dragon, was one of the most immensely powerful bio-engineered creatures that the Ancients had ever crafted. It was clear that Lagi would be no match for it, and the pair wisely fled the battlefield.