"Combine a Jet Set Radio aesthetic with Panzer Dragoon? Hell yes, I'll do that. It's like taking two of my favorite anythings and smooshing them together to create a... this. A thing that I did for a Jet Set Radio-related contest."

Kheel and the Dragon

A made up dragon form, invented for a Panzer Dragoon fanfic that was set 100 years after the original game (but was stopped as the story didn't fit with Panzer Dragoon Saga).

A miniature of He Who Is The Sky's Kreigzwilling, also known as War-Twin. This is the first of four photographs.

Kyle, Lundi, and the Guardian Dragon

Kyle Fluge riding the armoured Blue Dragon and Lundi riding the Sky Dart team up in an epic battle against the Guardian Dragon.

An original Panzer Dragoon dragon that is similar to the Blue Dragon, with differences in the wings and armor.

Orta sleeps in her mother's arms as they both wait for Edge to [never] return.

Here we have some concept art for a character who calls the Panzer world his home.

Azel's timeless words echo across the walls of Sestren as Orta finds out the truth about her lineage. This drawing shows us what might happen if Orta was ever reunited with her mother. 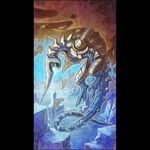 Although it not directly related to Panzer Dragoon, "Nago Tower" bears a striking resemblance. It takes place in a world that is abandoned by the gods. Left behind are these huge towers.

This unofficial dragon that the artist calls a Neo Dragoon has morphed into its agility form to be more aerodynamic.

The attack form of the Neo Dragoon is bulkier than before and its boney ramming horn has split into two. Power circuits extending through its wings give them the same distinctive patterns we've seen on many of this artist's dragons.

For obvious reasons the defensive form of the Neo Dragoon is the bulkiest of them all. Its light green wings are especially eye-catching in that they don't seem to blend with the rest of its armoured body.

I find myself struggling to find the right words to describe this beast. The twin horns of the Neo Dragoon's spiritual form come closer to resembling lasers than anything else.

An older piece of art from Atolm of a Panzer Dragoon Saga inspired dragon form that never ended up getting a name.

This is another drawing by Nevey of Azel and Orta but this time in the presence of a fire and someone else...

Orta and Azel ride their dragons through the sunset sky.

A thank you collection consisting of various parts of the Panzer Dragoon series. 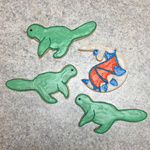 What's an anniversary without sweets? These dragon pup and Solo Wing cookies were made on the 20th anniversary of Panzer Dragoon Saga to celebrate the occasion.

A drawing of a Panzer Dragoon dragon.

A sculpted Panzer Dragoon Logo. This is a base for a Blue Dragon sculpture.

"panzer dragoon mood... made my own fella"

Created for Pix'n Love, a French retro gaming magazine. It's edited by some guys who make awesome video game books.

A PlayStation 5 controller designed with the Ancient ruins pattern.