A fan art of a dragon crest in an ancient lab.

A fan art of Craymen remembering the Blue Dragon and the Tower from the first Panzer Dragoon game. Based on the possibility of Craymen being an older Kyle Fluge.

This was inspired by the mirror in Shenmue and is made of copper. Sestrenegade's artistic skills shine here.

What words could better describe this dragon than "Drone Dragon"? The blue power lines running across its black exterior are enough to make you believe this was ridden by one of the Ancients.

Located on the edge of the western continent on the ruins of an Ancient vessel, was once a mere tribe that grew into an expanding nation of humans.

This form can't be found in any of the games; it was invented just for this drawing. The design is almost robotic, but fits into the world of Panzer Dragoon if you compare it to ships such as Mel-Kava.

The designs aren't tribal influences but come from the artist's inspiration from the Panzer Dragoon series. The shape of the helmet is a mix of Final Fantasy XII judge and a Halo ODST.

A outline only drawing of many of the dragon forms put together. He somehow managed to end up looking kind of evil though.

This dragon is difficult to describe. With its many wings, it doesn't resemble a dragon at first glance.

Three sketches of the Glider, Fledgling, and the baby pup.

Another version of the Eo Wing that somewhat resembles a fiery golden phoenix.

The difference between this Eo Wing and the previous incarnation are the red lines stretching across its wings. They resemble of electrical currents.

A miniature of the Guardian D dragon (found in a number of He Who Is The Sky's other drawings). This is the first of four photographs.

Again, we behold a dragon in a very uncharacteristic shape. Focus on the head and try not to think of it as a two dimensional creature, then the reason it was given the name Guardian Dragon becomes becomes all too apparent.

Another picture of this red "Guardian Dragon" created by He Who Is The Sky. 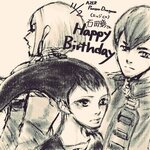 A sketch of Edge, Azel, and Orta drawn for Akira Ishida's birthday on November 2, 2020.

A drawing of a hunter riding on the back of a Coolia.

Imperial Conflict. Features the "Victory-Wing" causing havoc to the Empire, with He Who Is The Sky's older "Drone Dragon" as an obstacle to get passed.

A necklace of the Empire's symbol made out of peuter. No doubt many fans would love to have a copy of this, but Sestrenegade only made one of them.

Yes, there are even Panzer Dragoon fans with tattoos. This is the design for Cheesemaster's tattoo of the Empire's symbol (located on his leg). Talk about loyalty to the Emperor.

Take a glimpse into what the future might hold for the Panzer Dragoon series. This is the logo for the corresponding trailer of Panzer Dragoon Incubos.

The first drawing of the character Kari "the last dragoon", inspired by Panzer Dragoon and other stories.