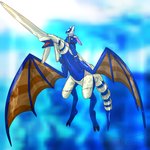 Fan art of the Blue Dragon and an anthropomorphic rider.

A collection of dragons with air plants.

A series of fan art of Panzer Dragoon dragons and mushrooms.

"In the event I have to go out in public again, I have ordered these masks with my Panzer Dragoon art on them. Today was the first time I was out in public since April and I wore one of these disposable masks."

"So I saw a Panzer Dragoon art thread the other day and was 100% thrown back into my childhood. I just had to do some tribute sketches..."