I’ve added three videos to the site that many of you will be familiar with. These fake trailers were created by Lord Craymen and Senor Kaffee to trick fans into believing that a new Panzer Dragoon game was on the horizon. If you haven’t seen the trailers, be sure to check them out in the Videos section.

Tyrone Kamran has submitted a new piece of fan art depicting Edge’s fight with the baldors at the start of Panzer Dragoon Saga. 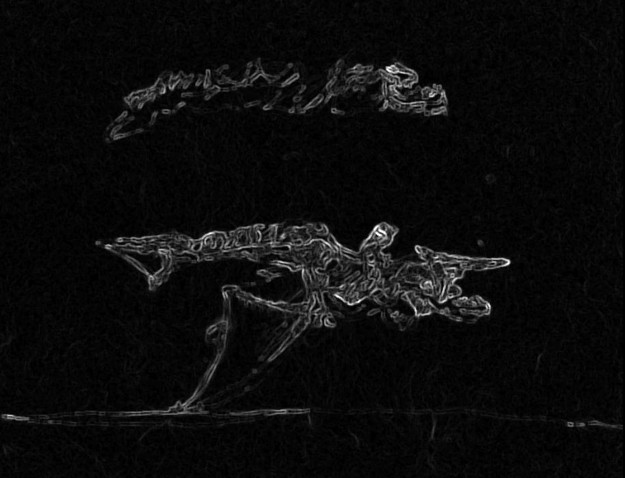 The image was created using rotoscoping, and the artist hopes to create a full animation of the fight in the future. Speaking of artwork, you may be aware that The Art of Panzer Dragoon, undoubtably the best Panzer art site on the web, is currently offline. If you’re looking for the art from that site there’s a copy on the Internet Archive although be aware that some of art won’t load. I can’t confirm when The Art of Panzer Dragoon will be back online.

If you missed the update on Panzer Dragoon Legacy, there has been some progress in the development of Xbox emulation on the PC. The Cxbx emulator now runs Panzer Dragoon Orta, although admittedly it’s far from playable at this stage. You can read more about it on the developer’s blog, and see it in action in this YouTube video:

It’s great to know that someone is working on this.

The Will of the Ancients now has a microblog that be found on the Facebook, Twitter, and Identi.ca social networks, so you can be informed of news updates and more straight from these services. I’ve wanted to add an RSS or Atom feed to this site for a while but given the limitations of how the site was originally coded it’s not practical to implement one. I recommend subscribing to a feed on Facebook, Twitter, or Identi.ca if you want updates sent to your feed reader.

If you’re looking for a good film to see, James Cameron’s Avatar is a fantastic achievement in cinema and features many similarities to Panzer Dragoon (especially Orta), so be sure to check it out. And that’s it for this update. I hope everyone has an enjoyable Christmas and ends the decade on a high note.