What is Panzer Dragoon Legacy? 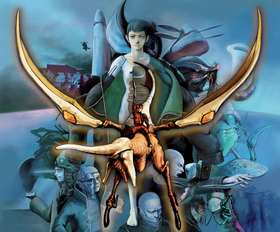 Panzer Dragoon Legacy has grown into the central Panzer Dragoon fan site for speakers of the English language, hosting the most comprehensive collection of Panzer Dragoon articles, fan art, and other contributions on the Internet. We also continue to host our long running Panzer Dragoon community forum for discussion of the games.

We continue to cover the legacy of the series by writing about new entries in the Panzer Dragoon series, works from the creators of original Panzer Dragoon games, and by sharing your fan creations based on this amazing fictional universe.

Solo Wing is Panzer Dragoon Legacy’s founder and web designer. Besides his passion for the intricacies of the Panzer Dragoon world, Solo Wing enjoys games that focus on flow and minimalist story telling that leaves room for interpretation. His favourite games include Panzer Dragoon Saga, Journey, and Shadow of the Colossus. Other than gaming, Solo Wing’s interests include philosophy, traveling, and reading.

Urban Reflex has been a long time member of the Panzer Dragoon community, becoming an administrator of the forum in 2004. He enjoys anything that allows him to escape the mundaneness of every day life, so expansive universes like that of Halo and The Elder Scrolls are his mainstay. Aside from this, he also has a burning desire to see the world and experience as much as he can. Variety is his spice of life.

Draikin created a Panzer Dragoon Orta website, also called Panzer Dragoon Legacy (the name was later used for this site instead of The Will of the Ancients). In 2010 an agreement was made to merge his site into this one, making Draikin an administrator in the process. Over the years Draikin has contributed to Panzer Dragoon Legacy extensively with news and other articles, along with helping to run our social media channels.

Admiral Craymen has been a fan of the Panzer Dragoon series since they were ten years old and first played the original game at a Blockbuster Video. It was 2007 when they finally got a chance to play Panzer Dragoon Saga. That game then became their favourite game in the series, and Craymen became their favourite video game character. Some of their other favourite games are Skies of Arcadia and The Legend of Zelda series. Besides gaming, Admiral Craymen also loves dogs, nature, and wildlife.

Skiad Ops Retro fell in love with the Panzer Dragoon series after discovering the Sega Saturn in 2016 and the series’ unique world and presentation gripped Retro’s imagination, converting him into a fan almost overnight. His long term goals for the Panzer Dragoon fandom include increasing the available English-language lore through professional translations of official material, and promotion of Panzer Dragoon games as high-score or speedrun potential games to increase their audiences.

Multibrawlr joined the team after helping to clean up and transition the community wiki to be maintained by Panzer Dragoon Legacy in 2021. As a House of the Dead fan, Multibrawlr is one of the primary contributors to The Wiki of the Dead.

Also, thanks to our small but loyal community for their continued support and their feedback that has helped improve the website, and of course to Yukio Futatsugi, Team Andromeda, and everyone else who participated in creating the Panzer Dragoon series.