In the SEGASammy results presentation for fiscal year ending March 2021, we’ve been given some information about the company’s roadmap over the next five years. One slide in particular will be of interest to Panzer Dragoon fans: the “utilization of IP assets”. The slide tells us that the company holds a large number of globally recognised IP and that these could be utilised after careful examination. In the examples of past IP groups (including dormant IPs), the Panzer Dragoon series is listed: 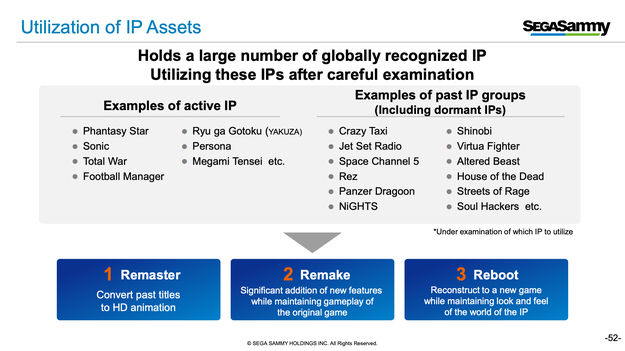 The “past IP groups” column that Panzer Dragoon is featured in is distinct from “active IPs”; this suggests that SEGA doesn’t consider the current projects published by Forever Entertainment and Wildman Inc as the franchise being active, at least in terms of SEGA being the publisher. If the Panzer Dragoon franchise is considered after careful examination, this might lead to a new release from SEGA themselves.

The slide goes on to mention several ways that SEGA may utilise their IP assets:

This news definitely doesn’t confirm that a new Panzer Dragoon release in the works, but it provides us with some hope to see SEGA explicitly consider the series. Even if SEGA released a remaster of Panzer Dragoon Saga, similar to the HD NiGHTS into Dreams release that they brought to new audiences in 2012, I’m sure a lot of fans would be happy. There’s the potential the Panzer Dragoon IP to be used in a sorts of small and large ways; with a success of Panzer Dragoon: Remake, and two further projects in the works, things are finally looking up for the franchise.