Recently, Multibrawlr adopted the Panzer Dragoon wiki on Fandom and started the process of cleaning it up. In a conversation in February, it was decided that I would take on the role of Bureaucrat, which is the highest ranking position a user can have on a Fandom wiki. Multibrawlr wrote the following on Discord:

I’m starting to think that Solo Wing should be the bureaucrat of the wiki (ability to promote and demote people), given his huge involvement with PDL and the community, and his knowledge of the series.

After some deliberation, I agreed to be promoted to this role. While there is an argument to be made for more independent Panzer Dragoon fan projects, it also makes sense that, given my history with running Panzer Dragoon Legacy, a heavily lore-oriented website, I should also lead the community wiki. This change in leadership effectively makes the wiki part of the Panzer Dragoon Legacy organisation, although we’ll continue to operate it as a distinct project. 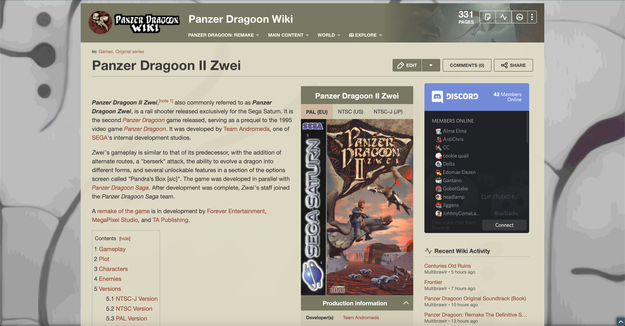 The first thing I did was arrange for some changes to the look and feel of the wiki. Panzer Dragoon’s colours are earthly tones and I felt it was important for the community knowledge-base to reflect that. Over the last couple of months we’ve steadily improved both the layout and the design of the wiki. Today we added a new logo and background image thanks to work by Admiral Craymen. We hope that you will appreciate the end result.

Multibrawlr and I have gradually improved the wiki, restructuring content into a more wiki-like format, adding navboxes, and filling in more detail to new and existing pages. The wider community has also pitched in; our thanks go especially to DesertRetro for his work translating pages of the guidebook Die Welt von Panzer Dragoon Zwei and adding this information to the wiki. There’s still a lot to improve and we’re just getting started. If you want to help out, we’ve set up a #wiki channel on the Panzer Dragoon Legacy Discord server which is where we collaborate.