Over a year after the game was released, Solo Wing reviews Panzer Dragoon: Remake, having spent time with the Switch, PlayStation 4 Pro, and PC versions.

When Panzer Dragoon: Remake launched on Nintendo Switch over a year ago, the game wasn’t in the best shape. Numerous technical issues plagued the game, along with missing features, leading to Forever Entertainment releasing a series of patches throughout 2020. Now that the game has stabilised, we’re in a better position to look at how Panzer Dragoon: Remake holds up as a finished game. 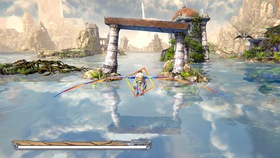 Panzer Dragoon: Remake is a modern recreation of the 1995 Sega Saturn game.

It’s no secret that the visuals of the Sega Saturn haven’t aged well. The original game came out twenty six years ago. Fast forward to today, and my phone is now many times more powerful than what the Saturn was capable of producing. It’s a fairly low bar, then, to expect the graphics to improve. MegaPixel Studio, who developed the game, is a relatively small studio and used the Unity engine to develop the game. The result is a game that looks good, but isn’t AAA quality, it’s something between an AAA and indie game. But if you keep your expectations with the mindset that this is smaller budget game, you can expect to play and be impressed by a modern looking version of the original Panzer Dragoon. 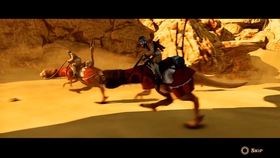 The cut scenes have been re-created using in-game graphics.

Panzer Dragoon: Remake has been visually recreated from the ground up, and as a result the cut scenes are now designed with in-game graphics rather than distinct pre-rendered full motion video sequences. The full game feels more cohesive without the significant change in visual quality between full motion video and in-game graphics that was present in the Saturn original. At the same time, that lack of a wow factor means that the cut scenes are less likely to leave a lasting impression on players this time around.

The gameplay of Panzer Dragoon: Remake is very faithful to the original. Essentially, the standard Panzer Dragoon rail shooter gameplay and level design has been replicated almost 1:1. There is an option to play the game with modern dual stick controls, but after some experimentation, I felt that the original controls where you both aim and manoeuvre the dragon with a left analog stick felt best for this style of game. When the game launched, there were numerous control issues, particularly around targeting. A year later, most of the inconsistencies have been ironed out. The result is a smooth experience that mirrors the gameplay mechanics of the original. 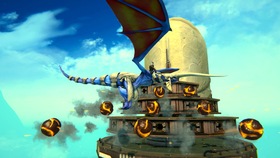 The player must repel cannon balls fired from the Imperial Flying Stronghold.

This time around, the difficulty level feels more even too. The original Saturn game took its difficulty from the Arcade games of its time. It’s now possible for less experienced players to play through the whole game on Easy mode, whereas the original version brought you back to the title screen at the end of Episode 4. I remember having difficulty defeating the Episode 5 boss even on Normal mode in the original; here, the difficulty feels more progressive, with each episode adding a greater challenge, while never making a play through feel like a struggle to accomplish. And there’s still hard mode if you want to return to that Arcade survival experience.

The gameplay holds up pretty well, considering its age, and it’s enjoyable to return to the episodes for subsequent play throughs; a quick 30 minute blast through the entire game which can be experienced adjacent to playing a session in a longer game. Overall, I’m happy how the gameplay has been implemented after its post-launch patches and refinements, but in aiming for an exact recreation, its perhaps too faithful to the original. Since the game is a remake, there was an opportunity to refine the original concept. The game’s sequels, Panzer Dragoon II Zwei and Panzer Dragoon Orta, both improved upon the rail shooter mechanics of the original title; here, Forever Entertainment opted to leave out these later refinements to the formula, so the berserk attack and smoother controls from the sequel aren’t present. Ultimately, it is a missed opportunity. 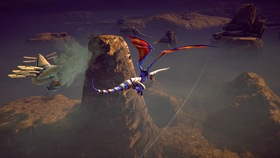 The Panzer Dragoon games all have stunning soundtracks, and the music here is just as fantastic as ever. The game launched with the late Yoshitaka Azuma’s original orchestral score as the only option, but soon after launch a new soundtrack by Panzer Dragoon Saga composer Saori Kobayashi was added alongside the original. Yoshitaka Azuma’s iconic soundtrack is hard to surpass, but the orchestral nature of the score makes it feel apart from the rest of the series; the addition of the second score by Saori Kobayashi brings the audio in line with later games in the series. The new soundtrack fits really well, so my view is that it was a wise choice to bring Saori Kobayashi back on board. Some of the tracks, such as “The Empire: Episode 3”, even surpass the original.

The sound effects have been changed, an unfortunately these don’t make quite the same impact as the original in places, particularly the sound of the dragon’s roar. But the original voice acting is all present, along the fictional “Panzerese” language, and I appreciate this being layered on top of real time scenes. The unique sounding, minimalist dialogue has always been adequate for a game of this length. 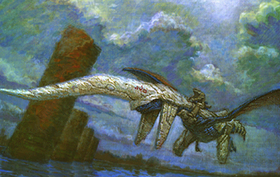 The art direction of Panzer Dragoon: Remake is one area in which the game departs from the source material. Most noticeably, the colour palette is a lot brighter in many places than the Saturn original. While the Saturn had a very specific range of colours which the original developers, Team Andromeda, were forced to work with, there was also intention in their colour choice. If you look at the concept artwork for Panzer Dragoon, which is found in the original game’s complementary guidebook, the same earthly tones found in the 1995 game were deliberately used in the art, matching the desolation of the story’s post-apocalyptic setting. In Panzer Dragoon: Remake, the change in colours was a deliberate design choice. To Panzer Dragoon: Remake’s credit, the colours have been significantly toned down from the almost florescent dragon wings we saw in the E3 demo, and we do see some later stages where the colours feel more in-line with the original (particularly Episode 3), but from the sunny water ruins of Episode 1 to the bright orange of Episode 2’s desert, this is an area where the remake feels like a step back.

The background details of the levels have been updated too, with additional elements added to fill up the space found in the more empty Saturn levels. While the limitations of the Saturn no doubt accounted for the emptiness to some degree, the sparseness of the original level designs also added to the game world’s desolate feeling. There’s a minimalism that you’ll see in modern games such as Shadow of the Colossus and Nier Automata, but that emptiness has been deliberately overridden here, and the game loses something because of that. 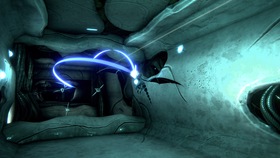 Some of the additional elements feel like they were added without considering how they fit into the wider series. The Ancient ruins of Episode 4 are now enhanced with the series of pipes and lights running along the walls. However, the distinctive, minimalist Ancient ruin patterns which are found in all of the mainline Panzer Dragoon games take a backseat.

I also have a few concerns around the general presentation of the menus and text used to present the game. While a small aspect of the game, all of the components of the presentation are important to Panzer Dragoon and work together to form a shared aesthetic. After completing the game, bright red text telling the player how to unlock Pandora’s Box is jarring against the earthly colours of the game’s logo and background. The cut scenes also permanently have the ‘Skip’ button prompt flashing in the bottom right corner, distracting the player from the story telling. There are a number of things like this throughout the game, and in general it seems the developers have tried to make options stand out, but in a way which distracts from the rest of the aesthetic. 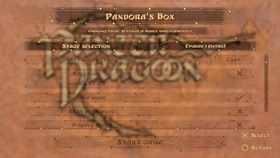 Panzer Dragoon: Remake is a short game, and you can expect to beat all seven episodes in about half an hour. This length is expanded somewhat with the addition of Pandora’s Box, a hidden menu that allows players to customise the game, along with an extra “Episode 0”, but there’s only so much extra longevity that these options will provide.

However, Panzer Dragoon wasn’t remembered due to having a lengthy feature set. It’s a minimalist experience that you can expect to pick up every now and again for a quick blast through between longer games. At its core, Panzer Dragoon: Remake is a rail shooter that is about steadily improving your shot down ratio with each play through, with the goal of achieving 100% shot down ratio on every episode. There’s a nice set of achievements that will add some additional replay value too, although we could have done without the “Lifeless” achievement which requires 100 hours of gameplay from the player.

Ethics disclaimer: Forever Entertainment provided a digital code of Panzer Dragoon: Remake (PS4) for review purposes and gifted me with a physical Classic Edition (Switch) for my support of the game. My name is listed in the Panzer Dragoon: Remake credits under “Team Support”; I acted in an advisory role and did not receive any monetary payment for my support during the game’s development.