The verdant forest stretched out as far as the eye could see, from horizon to horizon. Kyle and the dragon were nearing the heart of the Empire now, and most of the Imperial fleet had been dispatched to intercept them and take them down. 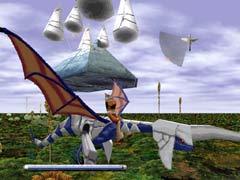 Kyle had to fight his way through waves of small fighters and many larger airships above the trees, and the ordeal culminated in a confrontation with the flagship of the fleet itself, a vessel that was practically a flying fortress. Unfortunately for the Empire though, even this monstrous ship could not rival the power of the dragon; it could not stop the creature from continuing its quest.