Beyond the parched desert lands a vast body of water opened up, and Kyle and the dragon flew out over the waves. Soon they found themselves passing through a mysterious sunken city, a sprawling ruin that continued to crumble into the waves even as they watched. The place was populated by various kinds of mutated monsters, strange species that had descended from the bio-engineered creatures of the Ancient Age. 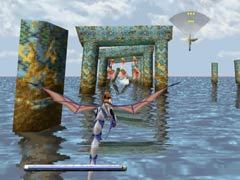 The dragon flew through a mysterious sunken city.

Kyle and the dragon entered the flooded halls of a great ruined building, but without warning the structure was blasted apart by the Imperial battleship that Kyle had seen flying over the desert. Presumably the Empire was searching for the dragon, eager to harness the immense power that it represented; the ship violently attacked them, but, armed with the superior combat abilities of the dragon, Kyle was able to destroy the hostile ship and escape with his life.