The following information is taken from “The Humanoid Man-Made Life-Form, Azel” section of the Japanese “Azel Panzer Dragoon RPG Guide Book”, a companion to the third game in the original Panzer Dragoon trilogy on the Sega Saturn, a forgotten classic. It attempts to clarify story elements that weren’t present in the game or were otherwise lost in translation. It was translated by GlitterBerri and commissioned by Panzer Dragoon Legacy.

The Truth of the Manufacture of Drone Autonomous Structures

Drones are man-made life-forms created by genetic manipulation that resemble humans. Thanks to the playback recording devices, we know that they were called Drone Autonomous Structures. There is evidence that development itself was progressing even before the former civilization was divided into two factions. From the beginning, an attempt was made to manufacture life-forms that preserved an appearance and cognition level identical to that of a regular human. However, because of the difficulties with the cognition system, they repeatedly and perpetually encountered production errors. As a result, the number of completed drones is thought to be quite insubstantial. The primary production goal was to replenish the number of capable workers that had diminished because of the decline in human population due to the deterioration of the environmental conditions at the time. In addition, a large number of uses were planned for the drones who were to act as the brains behind the bio-engineered monsters1 (assuming the role of their riders). However, there was the issue of bio-engineered monsters not being able to bear drone riders that did not possess a significantly high cognition level in comparison to them. In the end, during the final stages of the conflict between the two factions, the Preservation Faction created the Towers and succeeded in developing drones meant to maximize the display of the Towers’ might. The Destruction Faction realized this and hijacked a drone, known to us today as Azel. Within Azel was programmed the will of the Destruction Faction calling for the Towers’ decimation. Also included was a function to remove the transfer equipment to Sestren at the time of the dragon’s appearance. However, Azel was sealed away without being put into combat. The location of her sealing was the #74 Excavation Site where Edge later found himself. It was K. F. Craymen who predicted the excavation of the drone in his effort to grasp at true power.

A Man-Made Life-Form Awakens As a Human

Drones that were intended to act as the brains behind the bio-engineered monsters required a cognition level of at least 120. However, if their level of cognition were too high, problems would occur, with the emergence of an ego inhibiting functionality. Drones that incurred handicaps to functionality as the result of emergent egos suffered hindrances to their sympathy cortex, in short, rendering them incapable of acting as the brains behind the bio-engineered monsters. In addition, there were occurrences wherein drones would experience confusion in their logic patterns, be hindered in their ability to recognize orders, that is to say, rejecting complete obedience to the ones giving them the orders. It is clear from Azel’s role as the brains behind the Atolm Dragon that she was a drone with a cognition level of at least 120. It was due to this that she suffered the impediment of an emergent ego, and became unable to recognize the actions she was meant to take. It was due to the appearance of the error that Azel followed the instructions of Craymen, despite the fact that they opposed the will of the Destruction Faction. 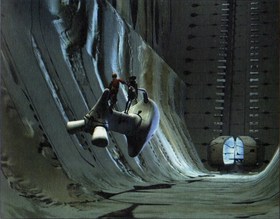 Only in the event of a psychological shock have there been cases where the impediment of an emergent ego was mended, and Azel was transformed by a psychological shock around the time of Craymen’s death. However, this transformation was not the customary restoration of drone functionality, and instead Azel began acting according to her own will and emotions, making her exceptionally close to a human. Edge expressed that this incarnation of Azel had “become a human”, an observation with which we’re inclined to agree. Azel decided, under her own will rather than due to the Destruction Faction’s programming, to become the guide that would invite the dragon and its mediator to Sestren so that our goal and Edge’s will might be realized.

The Struggle of the Humans of Centuries Ago

Ah, the former civilization… Just what sort of technology did the humans living in that era possess? It would be difficult to fully express just how much time throughout our history as Seekers has been devoted to unravelling the mysteries of the former civilization. All the same the number of unclarified data points has only increased as a result of our continued investigations into the traces left behind by the former civilization. New mysteries spring forth incessantly. We have merely scratched the tip of the iceberg in terms of understanding their technology. The people of that time birthed new life-forms through genetic manipulation and created ecosystems, monuments to their power as the most advanced species on the planet. Perhaps they were only able to continue their preservation of life through advancements in technology and medical science due to the paucity of environmental conditions at the time. Because of this, there was no other way for us to thrive except to bring new life into the world. However, this strategy had its limits. People could not bring themselves to believe or comprehend that it was possible to perfect technology whose purpose was to revitalize the life force of the planet itself. This spurred the conflict between the two factions, and caused the curtain to fall on their reign. What remained of their civilization carried on quietly existing: A handful of humans, the Towers that breathed a little life into the planet, the aggressive life-forms that continued to thrive in the midst of natural selection, and the dragons and Azel… All representative of the struggle of those who had welcomed the end. It is uncertain whether they hoped to become gods, but we shall accept the path they walked as truth. We desire to begin our own struggle in determining how we will live from now on.