As we touched on in the last paragraph, the Destruction Faction’s surviving program was removed from Sestren, and its existence as a dragon by humans over 50 years ago. The program wasn’t able to assume a dragon shape right away, and needed to infiltrate the genes of some type of organic life-form. At the time, there was a village producing large numbers of coolia varieties (an aggressive calvary-type life-form capable of being bred), and the program chose to penetrate the genes of one of these. It just so happened that the village was home to the former leader of the Seekers, Master Lundi, and it was from a coolia he bred that the variety the program chose to enter was born. The citizens of the village brought a taboo against this variety of coolia and attempted to destroy it on the spot immediately after its birth. However, Master Lundi protected it from harm, naming it Lagi. He later remembered that he intuitively judged that Lagi, who had wings sprouting from its back, shouldn’t be destroyed. Following this, Lagi quickly grew up into a dragon. Flown by Master Lundi, it brought about the destruction of Shelcoof (elaborated upon on P. 147).

The Dragon & The Mediator

We have touched on the fact the dragon is a program left behind by the Destruction Faction with the goal of liberating the humans from Sestren and the Towers. However, there remains absolutely no record of the infiltration and destruction of Sestren and the Towers by a single dragon. When a dragon appears, there is always a rider. But why are riders necessary? This is because there must be a human to make the decision put forth in the original goal of the program: “Humans ought to decide their own path.” That is to say, the rider is a mediator that chooses the path mankind will follow. Thus, the dragons moved to destroy Sestren and the Towers based on the will of the mediators. As for surmising the conditions for the choice of a mediator, it is said that the selected person must be a youth who recognizes neither the will of the Preservation Faction nor the Destruction Faction, which date from the reign of the former civilization. Though it follows that one mediator would suffice, Edge was one of four mediators to be chosen. This could have been due to the considerable amount of time needed for the awakening of the drone that opened the way to Sestren. In addition, the period of time that humans can be considered juveniles is extremely short. Therefore, the dragon would be required to change mediators. Following his initial encounter, Master Lundi, the first mediator, lived his entire life without seeing the dragon again. Though it isn’t possible to confirm whether or not Kyle Fluge, chosen as the 3rd mediator at the time of the “Tower Activation Experiment”, made contact with the dragon again, we can suppose that contact didn’t occur a second time. The 2nd mediator was killed by the prototype dragon (elaborated upon on P. 147) directly after the Tower Explosion Experiment.

It would be natural to assume that Sestren, which birthed the dragon and removed it as though it were a bug, sensed when it took on the form of Lagi and attempted to make contact with a mediator. In order to eliminate the dragon, Sestren sent Shelcoof (a type of flying Tower known as a ship) to Master Lundi’s village to destroy it. However, Master Lundi and the dragon happened to be away from the village and escaped hardship. Witnessing the actions of Shelcoof, the will programmed into the dragon by the Destruction Faction was fully awakened. In order to avoid its own destruction as well as to protect its mediator, the dragon grew once again and carried out a battle with Shelcoof. The Empire, becoming aware of the existence of Shelcoof and the dragon, moved to appropriate their power for themselves. This conflict is known to posterity as the “Shelcoof Incident”, and was the moment of the dragon’s awakening. The event itself was brought to a close when the dragon destroyed Shelcoof, and petrified part of itself within the Tower in order to thoroughly seal away its functions. 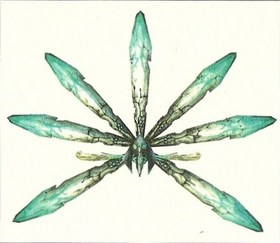 The Guardian Dragon (GD). The enormity of its body far exceeded that of the dragons. The reason it was called the Guardian was due to the fact that it was given the role of protecting Shelcoof.

At the time of the Shelcoof Incident, a creature appeared that could be called a false dragon due to its similar form. We call it the Guardian Dragon (referred to as the GD henceforth). The GD initiated a battle to the death with the dragon ridden by Master Lundi and ought to have been eliminated, but it was resurrected during the Azel Affair as though responding to the dragon ridden by Edge. The GD was a dragon left behind during the reign of the ancient civilization by the Preservation Faction in order to guard Sestren and the Towers. In addition, it was imbued with the will to eliminate the dragon left by the ancient civilization’s Destruction Faction upon its appearance. It can be supposed that the GD had some sort of influence on folk tales stipulating that dragons were ominous creatures.

In the 81st year of the Empire, the Imperial Army was successful in activating a Tower for the first time. The was the Tower Activation Experiment. The dragon, sensing the activation of the Tower, appeared once more to search out a mediator. Having obtained one, the dragon was activated with the goal of stopping the Tower. Thus, the battle against the aggressive life-forms produced by the Tower unfolded. This time, the aggressive life-form that stood in the dragon’s way was the Prototype Dragon. Sestren charged the Prototype Dragon with the task of protecting the Tower and eradicating the dragon. Its rider, like Azel, was a man-made life-form known as a drone. As an addendum, the mediator chosen for this conflict was Kyle Fluge.