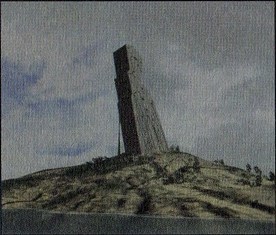 The Tower infiltrated by Edge. Normally, a large number of bio-engineered monsters would be produced in order to repel trespassers from the outside, but Azel's power exercised influence over this function, even from outside the Tower. Due to this ability, it was possible for Edge to infiltrate.

The person at the heart of the Azel Affair was a single girl called Azel. Who was she, exactly? The answer to this question will be established later on (P. 154), but Azel was a drone (a man-made life-form resembling a human) seized from the Preservation Faction by the Destruction Faction and played the role of the device used to explode and destroy the Tower. She also possessed the ability to operate the path between the deepest part of the Tower and Sestren. Without her, it would have been impossible for Edge to set out towards Sestren, even with the dragon. The Destruction Faction may have programmed Azel with these powers in preparation for the appearance of the one capable of deactivating Sestren. We had received confirmation about the existence of the drones from the recording playback devices left behind by the Destruction Faction, but Azel was the first that we witnessed close-up.

The Goal of the Towers 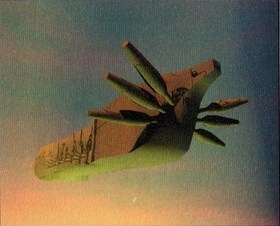 Shelcoof. A Tower in the form of a ship. Aside from what's written here, not much else is confirmed about these mobile Towers.

Currently (at the time of writing), the existence of two types of Towers has been confirmed. The first are literal Towers rising up out of the earth, such as the one infiltrated by Edge during the Azel Affair. These played the role of preserving and rejuvenating the soil and surface of the planet and were used to retain the moisture level of the surrounding earth. The second, known as “ships” during the Shelcoof Incident (elaborated upon on P. 147), take on a form reminiscent of battleships as they float through the skies. These served to rejuvenate and preserve the atmosphere, in addition to possessing circulation capabilities that allowed them to suck in polluted air, purify it within, then release it. In addition, these Towers produced H2O, caused rain to fall, created the seasons, and preserved the oceans. What both types of towers have in common is the production of bio-engineered monsters1. On one hand, these bio-engineered monsters were used by the humans as a food source, on the other hand, there were also individuals created in order to curb human overpopulation by thinning the herd. This exemplifies the means by which the Towers exert control over humanity. Though it has already been mentioned, as long as Towers continued to exist, it was impossible for humans to release themselves from the curse placed on them by the former civilization.

The Events that Followed Sestren’s Cease in Function 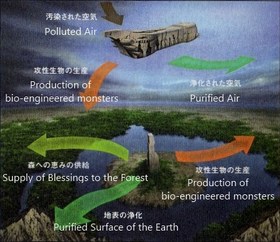 The Towers' environmental preservation activities. Along with the circulatory functionality that allowed them to purify the polluted atmosphere and surface of the earth, these Towers produced great numbers of bio-engineered monsters used to curb human overpopulation.

Sestren was destroyed due to the actions of Edge, and all the Towers ought to have ceased functioning. However, a large-scale biologically critical transformation has yet to take place within our bodies. This may be because the effect of the purification operations that had, up till now, been conducted by the Towers, remains to some degree within the atmosphere and on the earth’s surface. It can also be imagined that thousands of years of these purification operations have produced, as byproducts, microbes and vegetation possessing the ability to purify the atmosphere and the surface of the planet. However, perhaps the Sestren that was destroyed in the Azel Affair operated only a small fraction of the Towers, and there are several Sestrens that continue their activities to this day. In order for us to obtain reliable confirmation, an investigation of each continent is ongoing. From now on, mankind shall deviate from the ethics practiced by the former civilization and carry out the protection and production of life. There is nothing to be done but to continue these actions unceasingly until this planet’s life is extinguished.

Those Who Birthed the Dragon

Even among the bio-engineered monsters produced by the former civilization, the individual possessing the strongest capabilities was the dragon. Both the Preservation Faction and the Destruction Faction were participating in its development, but there is no record of its large-scale production. The reason the dragon appeared during the Azel Affair is related to the situation during the latter days of the former civilization.

During the final conflict of the former civilization, the Preservation Faction, who excelled in their understanding of technology, found themselves in a position of superiority. The Destruction Faction was convinced that the battle would end with the Preservation Faction’s victory and that mankind would fall into ruin at the end of the conflict. True to their conjecture, the majority of mankind went extinct, and all that remained was Sestren, who inherited the will of the Preservation Faction and continued to direct the Towers in their activities aimed towards environmental and biological preservation. However, at the end of the conflict, all that remained of the will of the Destruction Faction, who believed that “the life of the planet and the continued existence of mankind is not something to be controlled by technology”, was formless criticism. This idea was successfully programmed into the as-yet-incomplete Sestren as the determination that “the future of humanity ought to be decided by humankind”. However, Sestren itself discovered the existence of the program and removed it from its functions, regarding it as a bug. As a way of dealing with these circumstances, the program was also configured to turn itself into a dragon. The dragon is an organic life-form molded from the will left behind by the Destruction Faction during the latter days of the former civilization.