The Towers That Renew & Preserve Existence

No one imagined riding on the backs of dragons. Nor the idea of infiltrating a Tower with a dragon as your companion… However, these plots were all carried out by humans of the civilization in centuries past.

It has been clearly recorded that the former civilization’s collapse was the result of the conflict between the Preservation Faction, who attempted to gain complete control of the planet, on the course of destruction, using technology, and the Technology Destruction Faction, who believed that one ought not to interfere with the laws of nature, but rather leave things to progress as they would. At the end of the conflict between the factions, the human race at the time had declined so sharply that one could say they were more-or-less extinct.

However, in the end, it was the Technology Preservation Faction who achieved victory. This is clear because the bio-engineered monsters1 created by the technology continued carrying out their activities. The giant systems developed and put to work by the Preservation Faction to preserve life on the planet were Towers. The conflict between the two factions wrought further destruction on the planet, already near death, but the Towers continued to function and carry out their activities, working ceaselessly until the Azel Affair brought about their end. Though it is expanded upon later, the Towers’ primary use was to stimulate the renewal of the air and surface of the planet, and preserve an environment in which humans could thrive and breed. As with the village of Zoah, for instance, the Towers would irrigate the forest, give “blessings” (fruits and small bio-engineered monsters used as food) to the people, and attempt to continue existence.

However, that is not to say that the Towers only granted favors to humans. There were also many bio-engineered monsters produced with the goal of preventing the excessive proliferation of humans by thinning out the population. This way, even if the human race produced a lot of heirs, everything would still be under control. We fled from the control and domination of the technology, which could be called the Towers’ curse, and chose a path that lead to the destruction of the Towers in our quest for self-reliance. 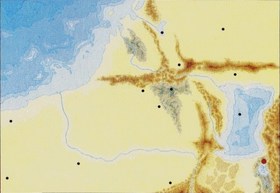 The Towers' Continental Distribution Map. A map of the Tower distribution across the continent, as confirmed at the time of this volume's compilation. The red mark on the right-hand side of the map is the Tower infiltrated by Edge when he advanced towards Sestren.

Even today, several Towers still exist on this continent. The Tower destroyed by Edge was only one of many. Our investigation has confirmed the existence of 12 Towers around the Empire’s dominion at the time of this volume’s compilation.

The distribution of the Towers is meaningful, because it relates to each Tower’s renewal and preservation capabilities. We can guess that there was a tendency to position the Towers in such a manner as to avoid the omission of areas outside the range of the effectiveness of the Towers’ abilities and cover the entire surface of the earth. Judging by this, there may be around 10 undiscovered Towers existing on this continent alone. It must have been Sestren, the relic created by the Preservation Faction during the reign of the former civilization, that was controlling all of these Towers. However, Sestren exists in an unknown location that could be thought of as a different dimension, and without infiltrating the deepest part of the Tower and causing one part of it to operate, it is impossible to reach. Edge is the only person to have visited that place.

Sestren: Technology With a Will of Its Own

Thanks to the former civilization’s recording devices, which were excavated during our teams’ investigations within the ruins and our explorations outside the continent, we’ve come to understand the existence and function of the Towers.

Sestren was the system that supervised the function of all the Towers, coordinating the transformation of the atmosphere and the entirety of the earth’s surface, and issuing operative orders to the Towers when necessary. Detailed information about the management of the environment was transmitted from the Towers to Sestren when necessary, which would instantly calculate and readjust the balance and give directions concerning preservation activities to all the Towers once more. There are a few differences in their forms, but it is thought that they were similar to our Towers. However, Edge is the only one to have seen Sestren. Because he has not appeared to us since then, we don’t know anything about its shape for certain.

Because Sestren was established according to the strong will of the Preservation Faction, who sought to ensure the continuation of life on the planet and purify the atmosphere, it was continued for many thousands of years. However, thanks to Edge and the dragon, these functions were brought to a complete halt.