The Blue Dragon in its cameo in Panzer Dragoon Orta.

Having made an appearance in all four Panzer Dragoon games, the Blue Dragon represents the strongest form of the iconic dragon. It’s only fitting that it’s in this form that the dragon makes a reappearance in Sonic & All-Stars Racing Transformed. The Blue Dragon can be seen flying along the track several times as the race progresses.

The Basic Wing in Dragon Canyon?

Aside from the Blue Dragon, you can also notice smaller dragons flying around. While it’s difficult to see from the videos we have so far, they appear to have the form of the Basic Wing from Panzer Dragoon Saga. 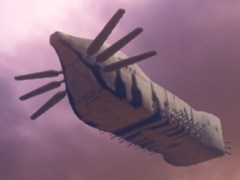 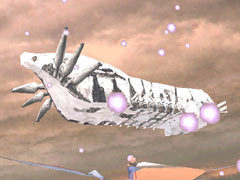 The enormous Tower of Shelcoof from Panzer Dragoon Zwei can be seen stationed directly above the track. Apparently it will use its beam at one point, causing a wave which travels across the level. 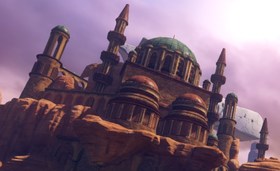 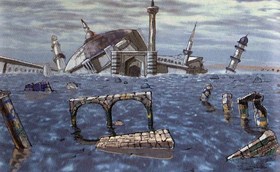 The building architecture in the original Panzer Dragoon (artwork).

The buildings that can be seen in the Dragon Canyon have a similar building style as those seen in the artwork and the sunken ruins in the first episode of the original Panzer Dragoon.

The entrance to ancient ruins in Sonic & All-Stars Racing Transformed.

The entrance to ancient ruins behind a waterfall in Panzer Dragoon Orta (artwork).

In the canyon where the race takes place, we can see several white ruins with black line markings running through them, just like those we see in the Panzer Dragoon games. This distinct style makes them easily recognizable. These ruins often contained bio-engineered monsters and were therefore a dangerous place to enter.

The interior of a tunnel in Dragon Canyon.

The entrance to Sestren in the Tower of Uru.

In a small tunnel section the game shows objects emitting a green glow that are reminiscent of objects we see inside of the Tower of Uru in Panzer Dragoon Saga. 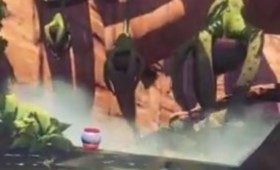 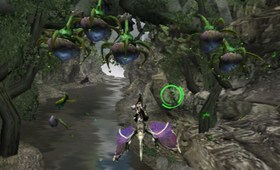 The plant-like creatures from episode 2 of Panzer Dragoon Orta also make an appearance, hanging from elevated areas over the track. Their design seems to have been modified a bit in Sonic & All-Stars Racing Transformed, and it’s not entirely clear if they attack the racers or not. 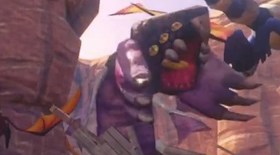 A yondo worm in Dragon Canyon. 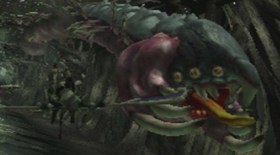 Like the goleg, the yondo worms from episode 2 of Panzer Dragoon Orta are seen swimming through the river and even breaking parts of the race track.

A Raider in Panzer Dragoon Zwei.

They’re very difficult to notice in the footage released so far but what appear to be Imperial fighters can be seen flying above the Dragon Canyon track. These seem to resemble the fighters seen in Panzer Dragoon Zwei and Panzer Dragoon Saga called “Raiders”, otherwise known as カルラ (karura) in the original Japanese version. 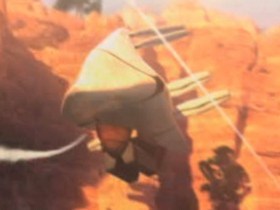 A Battle Cruiser in the intro of Sonic & All Stars Racing Transformed. 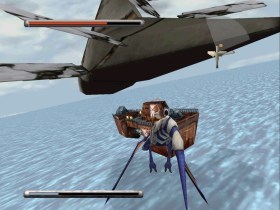 A Battle Cruiser in the original Panzer Dragoon.