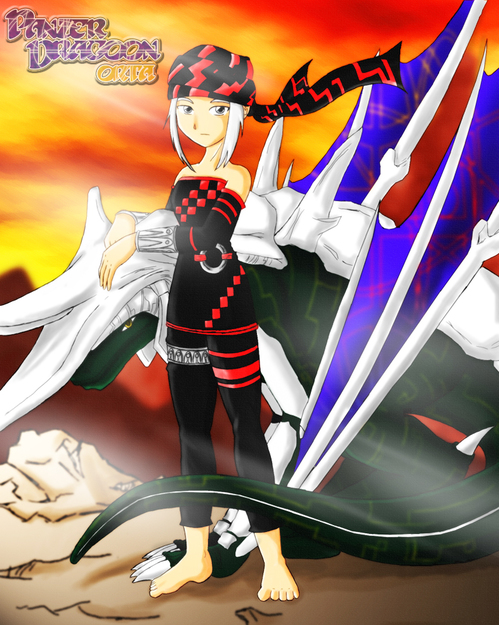 A picture of Orta and her dragon. The name of the picture comes from the Panzer Dragoon Orta theme song Anu Orta Veniya which translates as "When the Day Breaks".

“At laaast! I finished this one T.T I started to be tired of it… I was cging this when I posted the sketch version, some weeks ago… is not that it was more hard that others that I did, but lately I was very busy with university, job and some mails I had to send T.T that is also why I was not online this day… and I even should make some homeworks too! still I don’t feel like it ^^UU oh well.

Felicia Val helped me a lot with the cging of this pic ^^ I did it by myself, still she inspired me to create the background and helped me with some cging tips that came in handy… thank you very much! Still I can’t reach her cging level, I am so proud the way this looks by now… but sadly the cging wasn’t thought for some of the trick she teach me, so thats why some parts aren’t so much contrasted, like the bone like parts of Lagi… oh well…

The pic was inked and cged with open canvas ^^ . Personally, I found it harder that do it in photoshop, still I wanted to improve my levels… In deviantart I saw lots of awesome pics of lots of people that was maden in open canvas and the level was profesional like… so I felt like trying myself ^^. the cg level isn’t so high, still was nice to learn some stuff and to practice with my tablet…

The sky was created with photoshop… but was so sad that in this pic only a small part of the day’s break’s sky that I created can be seen… I really liked how it turns! the mountains looks very simple, but anyway, they look as montains, and hardly can be seen… the thing that gave more trouble was the ground… If wasn’t for Felicia, I would created a grass one, just like so many of my cged pics ^^U … still she gave me an idea for a background… I tried to create a suitable rock ground with photoshop, but I didn’t manage to make it, so I just gave up and drew it in photoshop with the tablet… I am not used to draw this kind of grounds, but I liked how it looks ^^

I also try hard in the Panzer Dragoon Orta logo… the font is called “Hoffmann”, and is the official Panzer Dragoon logo font ^^ I found it searching in the net when I was cging the “Anu Orta Veniya” pic I drew months ago… still the font itself looked a bit odd, so I just created some effects in order to make it more complex and Panzer Dragoon official title’s like ^^ I wasn’t able to get the closest effect, still I like how it turns ^^

Now lets see if one of this days I can draw Azel, or Edge… perhaps if I start to play seriously to Saga game ( awww, where can I find a Panzer Dragoon Saga pal version original at good prize? T.T the emulator thing goes very slow and i have no chip neither memory battery in my dear old Saturn).

If someone wonder about the name of the pic, it names comes from the ending of Panzer Dragoon Orta, Anu Orta Veniya, that means literally “when the day breaks”. That song became one of my favs ^^”