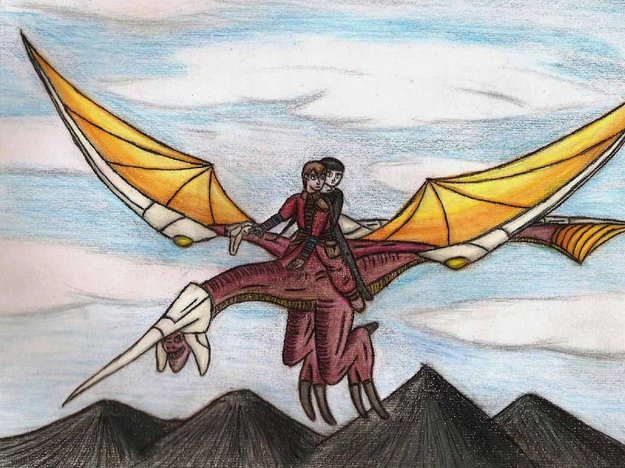 A scene inspired from the last act of the game right before the final boss fight when you can go around the world map doing one last sweep of all the locations to finish all the side quests and secrets.

“The two main characters, Edge and Azel were quite difficult to draw, as I typically don’t draw characters that small in proportion, but the dragon was actually a lot of fun to draw (I took some liberties with the various dragon designs from the game, as it tends to morph as you level up). As always, I sketched out the scene, colored it with my old Prismacolor pencils, then inked over it. I tell ya, I felt like I had to use surgeon-like precision to ink over all the small details on the two characters, and even then I think I still messed up on Edge’s facial features. x’D Fortunately, I think I fixed a lot of that when I edited the scanned image in Photoshop. Much like my recent fan art, the background was sort of thrown in at the last minute, but I think it turned out alright. Overall, I’m very pleased with this one, it was fun to try something different, and I’m just very happy to celebrate one of my favorite role-playing games and share it with you all. :)”