Thanks to our various contributors for this lastest batch of fan art: Here’s to an artful new year.

Back in the 90s, it was common place to PCs to come with a 3.5 inch floppy drive. Sega released a version of the Panzer Dragoon’s soundtrack in MIDI format, and the entire soundtrack fit on one of these 3.5 inch disks. It was called Panzer Dragoon...

Now that the Panzer Dragoon community is bound to become more active, we’ve created a new Discord server for our community. While I’ve already joined several Discord servers from other communities, this is the first server I’ve created. We’re...

Forever Entertainment, probably best known for developing and publishing Fear Effect Sedna, has announced that they will be releasing remakes of Panzer Dragoon and Panzer Dragoon Zwei! The remake of the original Panzer Dragoon will feature...

Version 1.3 of Galerider, the Panzer Dragoon-esque rail shooter for iPhone, has been released on the App Store. The game is now available in a number of new regions: France, Germany, Japan, Korea, Brazil, Hong Kong, Taiwan and Latin American....

Brave Wave are currently selling signed vinyls of Resurrection: Panzer Dragoon Saga 20th Anniversary Arrangement over on Bigwax. If you’re from Europe, Oceania, Africa, Asia, the Middle East, or Latin America you can grab one, but you’ll need to...

Lusty Lundi has contributed two new drawings. The first depicts Mobo celebrating the birth of his child, and the second is of everyone’s favourite drone. As you can see, both drawings are available in coloured and uncoloured variations.

Questions and Answers with the People Behind Galerider

The Galerider team has kindly answered some questions about the new Panzer Dragoon-esque title for iPhone. My thanks to Daniel Choo and the development team at Orion Arts for providing this additional information about the game. Panzer Dragoon...

Galerider 1.1 Released and My Impressions of the Game

Orion Arts has released version 1.1 of Galerider on the App Store, which fixes the UI scaling issues on newer iPhone models. The game should now be fully playable on modern iPhones (6S and above). With this fix released, I’ve been able to play...

Galerider is Now Available on the App Store!

Galerider, a new Panzer Dragoon-esque rail shooter, has been officially released on the App Store. Congratulations to team at Orion Arts on the launch! Galerider requires iOS 11 or later and is compatible with iPhone (an iPhone 6S or later is...

Galerider Launching on iPhone, Planned for Android "Much Later"

We have some additional information regarding the platforms that Galerider will be available on. Daniel Choo from Orion Arts has provided the following statement: Unfortunately the iPad will not be supported. Given the iPad’s form factor...

Galerider, a new dragon rider combat game for iOS that looks a lot like Panzer Dragoon will now be launching on October the 10th. Orion Arts has released a new trailer and screenshots: https://www.youtube.com/watch?v=-YRxbEp3wXs ...

I’ve added six new pieces of fan art to the site. Thanks to the many contributors for this round of art. You may also notice we’ve split some of the site’s categories, including fan art, into smaller, game-specific categories. As an...

Singapore based mobile developer Orion Arts has announced a new mobile game, a dragon riding adventure called Galerider. The reason we’re posting it here is that it looks a lot like a certain other dragon riding rail shooter, complete with lock on...

We have a new fan art contribution, this time of Orta: Thanks to Space Lion 88 for the contribution.

Saori Kobayashi to Play at Metroid Metal Event in September

Metroid Metal, a band which provides a “celebration and interpretation of the Metroid soundtrack” will be performing in Houston, Texas this September. Panzer Dragoon Saga composer Saori Kobayashi will also be performing at the concert as a special...

Some fans have reported that they’ve received the vinyl edition of “Resurrection: Panzer Dragoon Saga 20th Anniversary Arrangement” which had previously been delayed. Here’s an unboxing video from YouTube user SkillJim showing off the vinyls in...

A new build of Cxbx-Reloaded, an Xbox emulator for Windows, has been released which runs Panzer Dragoon Orta significantly better than previous efforts. Some new footage has been released showing almost the entire first episode running on the... 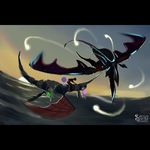 We have two nice, new additions to the fan art section. The first is a picture of a battle with Atolm, while the second is of everyone’s favourite drone, Azel. Thanks to the artists Saulo Souza and Pariah Exile Wrath for contributing these.

On the 30th of April 1998, several months after it’s Japanese debut, Panzer Dragoon Saga was released in North America. To celebrate, Polygon has released a massive article discussing the game with former members of Team Andromeda called Panzer...

Xbox Live Fr has posted a video comparing Panzer Dragoon Orta running on the original Xbox compared to what is currently the most advanced way to play the game: on Microsoft’s new Xbox One X console. https://www.youtube.com/watch?v=bCJJPA-S3Xk...

Panzer Dragoon Orta is Now Playable on Xbox One

Panzer Dragoon Orta is now playable on Xbox One, via backward compatibility. If you have your original Xbox disc you’ll be able to experience the game with a resolution upgrade on the Xbox One family consoles. Draikin has shared some screenshots...

PAL Xbox 360 users who tried using the console’s backward compatibility to play Panzer Dragoon Orta may remember that the game crashed at the start of Episode 4. In a surprise move, Microsoft has now apparently patched this bug, as pointed out by...

Brave Wave has reported that the vinyl release of “Resurrection: Panzer Dragoon Saga 20th Anniversary Arrangement” has been delayed from April to June: Due to a manufacturing error, we have to redo the 1st pressing of ‘Resurrection: Panzer...