A review of Panzer Dragoon: Remake (PC version) by Legaiaflame.

The original Panzer Dragoon was created by a small group of developers called Team Andromeda and was a grand showcase as to what the Sega Saturn was capable of in 1995. It had a unique art style for its time and was heavily influenced by the late artist Moebius. Fast forward to 2020 and we have a remake made by another small team, called MegaPixel Studio. With their goal being, to give the game a fresh coat of paint and update the game with the aesthetic benefits of todays technology. So, you may be asking yourself: does this new team breathe new life into a beloved Saturn classic? Well, yes and no. 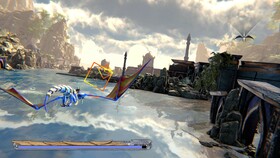 In Episode 1 they chose to cover the ruins in vegetation, surrounded by rocks with a more colorful aesthetic from the more solitarily isolated one found in the original.

The original Saturn game was hand crafted from the ground up, heavily inspired by the surreal artwork of Jean Giraud aka Moebius. It had a vision contained in it’s art direction that made it stand out from other Saturn games. From the unique creature designs to the mysterious world full of ruins and ancient technology. The game’s textures were hand crafted, seamlessly and organically blending into the world around them.

Fast forward to today and we have the new Panzer Dragoon: Remake, which intends to update and polish the creative design of the original. In some ways it succeeds and in other regards, fails to capture the unique art direction of the original. The remake wasn’t designed from the ground up. Rather, it uses the Unity engine. So, it seems the developers decided not to emulate the original’s art style completely. Like for instance, in Episode 1 where they chose to cover the ruins in vegetation, surrounded by rocks with a more colorful aesthetic from the more solitarily isolated one found in the original. 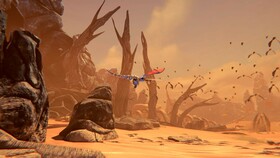 The desert has a blinding yellow tint to everything. Where, in the original, the desert landscape felt more organic, with earthy colors and textures that felt more natural.

I understand developers use premade engines to save time on development. But, given a little bit more time they could have truly filled the levels with more detail and truly fine tuned the lighting. For example: in Episode 2 the desert has a blinding yellow tint to everything. Where, in the original, the desert landscape felt more organic, with earthy colors and textures that felt more natural and fit in more with Moebius’ style. The remake now having a blinding mustard colored flash of yellow everywhere!

Also, all surfaces seem to have a shiny almost plastic-like look to them. Most objects in the remake have a sort of shine to them. This was apparently part of the art direction and a decision made by the developers but, it makes the remake feel more artificial in its art direction, rather than being able to stand on its own, being what is supposed to be an evolution of the original game’s art style. As Unity is indeed capable of more surreal and unique art styles, if the upcoming game Sable is any indication. 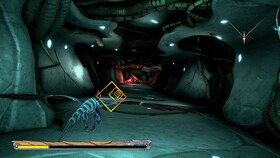 While the original Episode 4 was a trek though dark foreboding ruins, the remake breathes new life into this level, subtly lighting the tunnels and corridors with what could be described as a strange phosphorescent light.

Although, I can say that there are in fact some changes I liked to the art style as well. One such change can be found in Episode 4. While the original was a trek though dark foreboding ruins, the remake breathes new life into this level, subtly lighting the tunnels and corridors with what could be described as a strange phosphorescent light. It’s a unique take that gives the level a different kind of atmosphere.

I also really like the detail that has been put into the dragon model. Up close you can even see the small little cracks in its armor. And its wings and body are highly detailed. Unfortunately, I can’t say the same for the character model and animations of the main character Kyle. His model can be a bit stiff during cutscenes and he has limited facial expressions. This might have been acceptable in the Saturn version but not with today’s technology.

Regarding the creature designs, the enemies and bosses are just as oddly unique and interesting as they were in the original. Now, they’ve been updated with better textures and animations as they rush forward, looking to take your legendary dragon down! 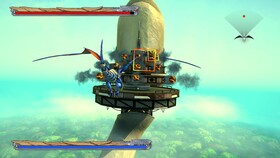 The enemies and bosses are just as oddly unique and interesting as they were in the original.

And, I would be doing the series an injustice if I didn’t talk about the atmospheric music! The original OST is just as epic and moody as it was in the original. Brought up to date and even improved upon. Which brings me to a nice surprise fans of the series will most likely appreciate! An alternative soundtrack has also been put into this remake by none other than Panzer Dragoon Saga and Panzer Dragoon Orta composer Saori Kobayashi! Her music is top notch and makes this remake feel like a brand new experience for fans looking to not just play the same game over again. Many of her alternative tracks in many ways outshine some of the originals!

Aside from the art style and music, the gameplay stays true to the Saturn classic. Staying loyal to its rail-shooter roots. Flying through levels as you aim an on screen reticule, lock onto enemies and blast them away! But not without a twist though. A twist that made Panzer Dragoon so unique in it’s day and able to stand out from other rail-shooters. You can turn and shoot 360 degrees!

Beating the game on any difficulty will give you a code to unlock Pandora’s Box as well as an image gallery. Pandora’s Box is a cheat menu that lets you play in God mode, making bosses easier and giving you a level select function. It adds some minor replay value to the game but not much.

In conclusion, the Panzer Dragoon remake is a nice facelift to the ageing Saturn original. When it first released, the remake wasn’t even finished and had to go through various patches and updates just to get it to an acceptable level of quality. In it’s current state, while not perfect, the game is a nice alternative to the original. Even having an alternate soundtrack for old fans wanting a new experience. While the art style might bother some fans and is subjectively debatable, this is a remake that was created and updated with today’s technology, while leaving the original in the Ancient Age.