Kyle and his dragon did reach the Tower eventually, but they were just a little too late. The Dark Dragon was able to enter the structure, and the ancient monolith increased its power dramatically; the monster emerged with masses of armour and weaponry grafted onto its body, clearly ready to face Kyle and his dragon once and for all. 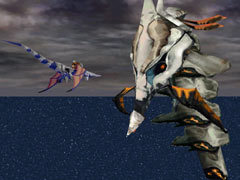 The Dark Dragon had been greatly enhanced by the Tower.

The dragons’ battle raged beneath the brooding sky and above the boundless, darkened ocean. The Dark Dragon’s lasers cut through the air around its foe but Kyle’s shots and the dragon’s lasers repeatedly hit home; the Dark Dragon’s great armoured body eventually took so much damage that the armour crystallised, crumbling off into the dark waters to reveal the creature itself.

The Dark Dragon fought on, but Kyle and his dragon were ultimately able to defeat their nemesis. For a moment, the Dark Dragon hung in the air before them; swinging its great head close to Kyle’s body it let out a screech of anger, then fell lifeless into the ocean.