The last obstacle between the dragon and the Tower was the Imperial Capital itself; this city was the heart of the Empire, an overcrowded metropolis that stretched out along vast and murky waterways beneath a contaminated sky. 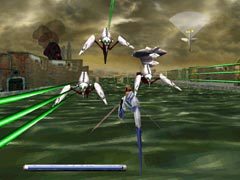 Pure-Type monsters attacked the dragon as it flew down the waterways.

The Tower had become fully active by now, and the hordes of Pure-Type monsters that had slept within its walls for millennia had been unleashed. These creatures laid waste to the Imperial city, carrying out their ancient duty of reducing human populations by force. This bio-engineered army - along with the remnants of the Imperial fleet, and the Dark Dragon itself - fired upon Kyle from all sides as he sped down the waterways of the city.