The ruin complex was a dark and ancient labyrinth; ageing machinery waited silently within its walls, and its passages and corridors stretched deep below the surface of the world. The Imperial fighter ships followed Kyle and the dragon for some time, swarming through the darkness and spraying gunfire at the pair. As Kyle descended further into the tunnels though, the pure-type monsters that the Ancients had left behind as sentinels began to awaken. 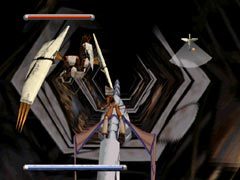 The greater guardian of the ruins was awakened.

Deep below the surface, Kyle’s presence disturbed an enormous flying guardian from the Ancient Age. The massive creature’s armour was completely immune to his dragon’s lasers, and Kyle had to rely on his own skill with the ancient handgun that he wielded in order to overcome this bio-engineered monstrosity. Soon after the battle, the Dark Dragon sped out of the shadows behind Kyle and his dragon; they rushed after the creature, reaching the end of the ruins and bursting into the sky above a vast forest.