Kyle’s pursuit took him through an Imperial excavation site in the depths of night; these excavations were the source of the Empire’s technology, and they had sites like this one throughout the Continent. Floodlights picked out a multitude of Ancient Age ruins and relics embedded in the rock faces all around. 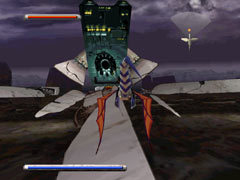 Upon sighting the dragon, the Empire again tried to take it down by force. This time Kyle was facing much more than just a single battleship though, as a small fleet was stationed at the site, and mounted artillery rained gunfire on the dragon as it passed. A massive Imperial combat vessel was also waiting for them there, a monstrosity that hovered through the air on helicopter-like engines and bounded along on massive hydraulic legs. After a considerable battle the dragon succeeded in downing the vessel, and with Imperial fighter ships still in close pursuit, the creature dived into the open mouth of the Ancient Age ruin itself.