The background story of the Panzer Dragoon series.

Long ago, the world was ruled by a culture now remembered only as the Ancients. In this forgotten past, the Ancients had achieved such a height of technological power that it would not be hard to simply consider them gods. With control over even the creation of life - through biological engineering - entirely at their command, there were few boundaries left for the ancient ones.

Despite all that they had achieved though, the Ancients could not escape the fact that they were lords over a dying world; the planet itself was a wasteland, scarred and barren from the wars of the past. The Ancients did not see hope for the people of the world; the past had proved that they would destroy not only themselves but the planet along with them if left to their own devices.

Because of this, the Ancients decided upon the use to which their technologies would ultimately be put: they decided to take control, not of any one factor but of everything.

The Creation of the Towers

The Towers existed to rejuvenate the planet's environment.

The Ancients created structures throughout the world that would come to be known as Towers, vast monoliths of technology that existed to impose their creators’ will upon the world. At their simplest the Towers were a global regulating system, built to keep the planet and everything on it stabilised and under control.

The world was lifeless and dying, and because of this one of the Towers’ main functions was to restore the planet, to rejuvenate the wasted environment. The world was also still populated by humans, so the Towers were designed to stop them from ever becoming a threat to themselves or to anything else again.

The Towers’ programme involved the ruthless reducing of human populations and the violent oppression of humankind, because if humankind itself was kept repressed then it would never be able to grow or to really advance; the Ancients realised that if humankind could not do these things, then it could not come to harm the world, and it could not risk wiping itself out in global war.

To achieve this domination over all life, the Towers contained internal genetics factories where bio-engineered creatures were grown. These were the creatures that would one day be called pure-type monsters, and they were little more than living weapons. Although the Ancients often utilised hordes of pure-types as sentinels to guard their facilities, a Tower’s pure-types existed to carry out the Ancients’ programme of control, to lower human populations and to keep humankind struggling.

As might be expected though, the Ancients’ plans were not unopposed in their own time. Even as the Towers themselves were being constructed, a group of rebels rose to hinder and sabotage the programme. To prevent these rebels or anyone else from threatening their goals, the Ancients stationed a dragon, the most powerful kind of bio-engineered creature they had ever created, at each Tower. Each individual dragon could match the combat force of an entire army, and the dragon’s role was that of an insurmountable guardian.

The Towers’ creators evidently had no wish to rule over a dead planet any longer, though. Ultimately the Ancients left the world, entering into ages of slumber within their own technology.

Even in their creators’ absence the Towers would endlessly carry out their will however, for the structures did not require manual operation. An artificial intelligence had been placed in control of the Towers, existing in the virtual space of a highly advanced data network that connected it to each structure. The network, and the central AI that it housed, became collectively known as “Sestren”.

The world has long been a wasteland.

Ten thousand years have passed since the Ancient Age reached its end.

The world has been a bleak and hostile wasteland for so long that the peoples who inhabit it cannot remember anything else. Despite the Ancients’ plans, the Towers have not been able to rejuvenate the global environments; they were unable to heal the wounds inflicted upon the world by the wars of the forgotten past.

The great monoliths slumber almost silently now, still tapped into the environments that they could not save but doing little else; their genetics factories lie inactive, and their armies of bio-engineered creatures sleep quietly within their cold walls. The struggling human tribes know nothing of their origins, and tales of the Ancient Age live on only in myths and legends.

For the people of this new world survival is an everyday concern, as the planet has long been overrun by bio-engineered creatures. There are two main varieties of these monsters now, with the most deadly kind being the original pure-type sentinels created by the Ancients; these ageless bio-engineered creatures exist now as they have done for millennia, tirelessly fulfilling their duties as guardians of the ancient facilities.

The more persistent problem for the current human race comes in the form of the world’s “mutated monsters” though, strange creatures that are the descendents of pure-types. Over thousands of years, pure-types eventually succumbed to genetic mutations that allowed them to interbreed, and thus they began to evolve and adapt as animals would; after so many millennia, most mutated strains bear little or no resemblance to the creatures that they originated from.

Mutated monsters have spread throughout the world.

While the pure-type monsters endlessly stand watch over the ancient sites, the mutated monsters have spread out through all the harsh environments of the present world. Unfortunately, the monsters - both pure-type and mutated alike - are almost universally hostile to humankind.

These creatures are the legacy of the Ancient Age, accompanied only by the silent ruins of its structures and facilities. The strange white and black substances that the ruins and pure-type monsters are composed of seem almost incapable of decay; they have easily survived down the millennia, despite the fact that most of the ruins themselves have been half-buried by the passing of ages. As these ancient structures are usually guarded by the fiercest of the Ancient Age’s bio-engineered sentinels, they are shunned by most present human societies.

The Birth of the Seekers

In time a human society emerged that sought to uncover the mysteries of the Ancient Age, however; not fearing the slumbering ruins, these people were instead dedicated to excavating them in an attempt to unravel the long line of forgotten knowledge. Because of their nature, this culture came to be known as the Seekers.

The Seekers’ overriding goal was to end the influence that the Ancient Age still had on the present world, to give power back to the current human race. They knew that the more they came to understand the Ancient Age, the better equipped they would be to overcome the Ancients’ terrible legacy.

In excavating the ancient sites, the Seekers eventually came to understand how to utilise the technologies of old. Unfortunately, time revealed that not all of the Seekers were united in their goals; some saw in the ruins of the Ancient Age a chance to repossess the legendary power that the Ancients had held…

There was eventually a schism in Seeker culture, and although it is all but forgotten in the modern world it was one of the turning points in human history. A group of power-hungry individuals left the Seekers behind, and eventually formed their own society. Time passed, and these corrupt humans became more and more skilled at operating the technologies and weapons of the Ancients. This nation eventually became known as the Empire. 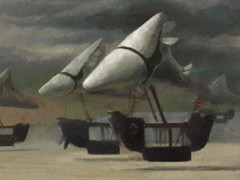 With an armada of flying battleships, composed of primitive metalwork attached to ancient antigravity engines, the Empire grew able to protect itself from the monsters that roamed the land. With the godlike powers of the Ancients on its side, at least in part, the Empire came to dominate the other peoples of the world, and to rule over vast areas of inhabitable land with an iron fist.

Only in the unexplored vastness known as the Frontier, beyond the reach of the Empire’s power, did the original Seekers and other human societies survive independently. Among these groups were many nomadic hunters and poor villages, trapped between the Empire on one side and the wasteland of the world, ruled by monsters, on the other.

The Search for a Drone

As well as the countless varieties of normal pure-type monsters left behind from the Ancient Age, there is another kind of bio-engineered organism that has survived down the millennia.

A drone is essentially a highly sophisticated pure-type monster, but one that has a humanoid form and that is able to think and communicate more or less like a human would. Drones were designed to fulfil various specialised tasks, often involving the operation of advanced technologies or the control of other bio-engineered creatures.

Very few drones have ever been encountered by the peoples of the present world, although the Empire had been highly motivated to find one ever since they learned of the drones’ existence. The Imperials knew that a drone could be the key they needed to control the many ancient structures that were still beyond their understanding, including the legendary Towers.

Largely ignorant of the Towers’ true nature, the Empire had always assumed that a Tower was some sort of ultimate weapon. With the supposed power of a Tower on their side, the Imperials believed that their hold over humans and monsters alike would be complete. Because of this they were determined to locate and take control of a Tower, whatever the cost.

The Origin of the Heresy Dragon

It was within the Sestren network itself that the prospect of the Towers’ destruction was eventually born. A rebellious entity emerged within the data network, a renegade program that wanted to shut down the Towers, to destroy them; it wanted the world to be free from the shadow that the Ancients had cast over the millennia.

Although it has no official name, this entity is commonly referred to by fans as the “Heresy Program”. The Sestren AI could not allow the will of its ancient creators to be challenged, of course, and when the AI located the Heresy Program it attempted to have it destroyed immediately.

But first, before it could achieve anything, the Heresy Program had no choice but to take on a physical form…