Orta walks over a verdant landscape.

The dragon had done everything it could to help Orta save the world from Abadd and discover the truth about herself, but now his quest had finally come to an end. However, the dragon was not without one last legacy for the world.

Orta walked on over a verdant landscape. Grasslands stretched out ahead of her in hills and valleys, all the way to the far-off mountains, where the sun was settling beneath a purple sky. 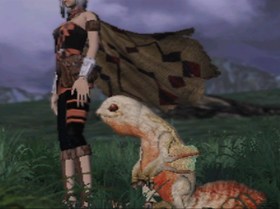 At Orta’s side, a small creature bobbed along through the grass. It was no higher than her knee, pale-coloured, almost reptilian in shape; but it walked on its hind legs, and had small wings where its forearms should have been. A new dragon, the heir to the dragon that was lost; the heir that the dragon had left to the world, and to Orta.

With the dragon pup by her side, Orta walked on towards the distant mountains, and an unknown destiny.