Chapter 10: The End of Destiny 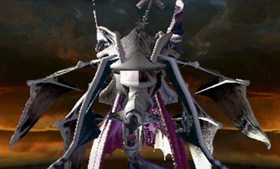 Abadd's new dragonmare form is much more powerful than before.

A vortex of dark clouds heaved above and around Orta as she faced off against Abadd at last. The strange organic mass that had emerged from the Cradle seemed to represent an unfinished process, and Orta wasted no time in laying siege to it. It was not long before Orta had taken the battle in hand, but this only proved to be the beginning of the real conflict. Abadd’s dragonmare exploded out of the organic substance, massively enhanced by the power of the Cradle; what had once been a white armoured dragonmare was now an enormous, many-winged beast overloaded with Ancient weaponry.

This new evolution of Abadd’s steed was incredibly powerful, even capable of firing lasers like a true dragon; all Orta could do was counter the dragonmare’s lasers with her own dragon’s before they could reach their target. The terrible creature also seemed to have some power over space that let it dive in and out of reality, like a fish in and out of water, and Orta found herself struggling to hit the phantom beast. 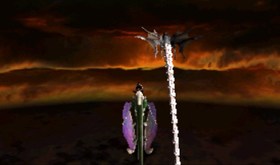 Abadd returns with an even stronger version of his dragonmare.

Despite all the dragonmare’s monstrous weaponry and all of Abadd’s cunning though, the battle still seemed to favour the true dragon; at least, for a time. Wounded, the dragonmare tumbled beneath the clouds, and for a moment it seemed as if the fighting might be over; but then the dragonmare surfaced once more, whipping a great serpent-like tail behind a body that had once again transformed. Abadd clearly refused to face defeat; for him there could be no failure, and he dived back into battle. This ultimate form of the dragonmare unleashed wave upon wave of lasers towards its enemy, but they were still not enough to overcome the dragon.

The dragonmare evaporates in the sky.

With a terrible artificial roar, Abadd’s dragonmare revealed that its body could withstand no more; from the tip of its tail, the great engineered creature began to slowly evaporate into pure energy, which floated off into the dark clouds. Even to the very end, Abadd had never thought for a moment of abandoning his mission; the last words he called to Orta were “I… need you”, and then he was consumed by the light. 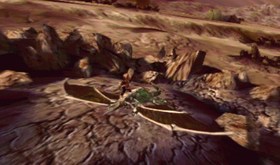 The dragon dies from exhaustion.

The battle was over, but the dragon had used its last reserves of strength to take Abadd down. The creature strained to lower itself gently towards the ground, and as its feet touched the dusty surface it collapsed. Orta tried to awaken her friend, begged him to open his eyes; but the dragon had already passed away.