The Cradle floated silently over the Imperial Capital, bound to the earth by great cables. Since Abadd’s betrayal of the Empire, the structure had essentially been dormant, unable to awaken any more dragonmares without a drone’s intervention. Now the Cradle suddenly resumed its halted processes though, working to breathe life into the countless dragonmares that slept inside its walls; the naive Imperials rejoiced, assuming that their attempts to reactivate the Cradle had at last succeeded, and that they no longer need the help of any drones. The Empire would soon find out how greatly they had underestimated their onetime servant.

The Cradle is reactivated.

As the Cradle stirred to life, the Sestren system returned Orta and the dragon to the real world; they found themselves deep within a ruin of the Ancient Age, the very ruin that sprawled through the earth beneath the Imperial Capital. While flying through the endless chambers of the structure, Orta saw first-hand how the Empire had amassed its power; the entire vast ruin had become an excavation site, where the people of the Capital mined night and day to unearth the technologies of the Ancient Age, and scholars toiled to unravel its secrets.

It was not long before Orta and her dragon were attacked by the Imperial forces that guarded the structure; the pair were forced to fend off dozens of small fighter ships that chased them through the vast chambers and claustrophobic tunnels of the ruin. In one great chamber, Orta found long rows of dragonmare embryos hanging above heating lamps; knowing the threat that these beings posed to the world, she eradicated them all. 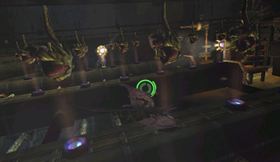 Despite the efforts of the Imperial forces, Orta continued to advance upwards through the ruin. In time, she reached an area where the crippled Assault Carrier Vermana was docked; apparently the ship was under repaired following its defeat at Yelico Valley. Although the ship was immobilised, its weapon systems were fully operational, and it opened fire upon Orta as she tried to pass. The dragon was now more powerful than ever, though, and the outcome of this battle was no different from the last.

Orta has to fight the Vermana again. 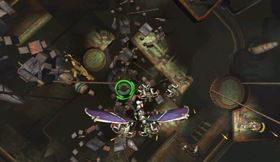 The facility starts to collapse.

On this occasion, the Imperial forces were not the only casualty of battle; as Orta and her dragon made their final dash towards the surface, the ruin itself began to cave in around them, and the Imperial structures that it supported crumbled and collapsed. In a final attempt to stop her from reaching the surface, the Empire tried to close the shutters to the upper exit of the facility, but they were too late; the dragon burst through into the open air.

Orta found herself inside a vast bowl-like structure of Ancient design, surrounded by monumental pillars that pointed skywards, towards the floating Cradle. However, the vengeful Empire had no intention of letting her escape alive, and here they had stationed their ultimate defensive weapon: the Imperial Defense Unit Bacharsuha. This bizarre and terrible ship was patterned after the human body; it had mechanical hands that were battleships in their own right, bound to its hull with cables, and all held aloft by Ancient float-engines.

The Bacharsuha rained rockets and lasers down towards Orta, and swiped at her with its metal claws. Just when the battle seemed to be falling in Orta’s favour, reinforcements arrived; several more hand-ships rose from the city and attached themselves to the Bacharsuha, and, charging with electrical power, they unleashed a vortex of deadly energy that spiralled outwards in all directions. Weaving around the deadly attacks, Orta fought on, and the dragon could not be stopped; once again the Empire suffered defeat as the ship crashed violently to the earth, dragging its fanatical crew down into destruction.