Unfortunately for Orta, the Empire had not given up its pursuit of her yet, and as she was no longer on the move during her stay with the Wormriders she was tracked down at last. A huge fleet of Imperial ships appeared without warning in the sky over the desert, and they soon swooped down to rain bombs on the Wormriders’ village. Mobo and his friends were formidable warriors though, and riding atop their faithful baldors they took to the skies to attack the Imperial ships, giving the other villagers a chance to make their escape.

Mobo and Orta evade the attacks.

Determined to help her new friends, Orta mounted her dragon and followed Mobo up into the clouds; once again it was clear that Imperial ships were no real match for the Ancient power of the dragon, and the Empire suffered heavy losses as Orta and the Wormriders tore through wave after wave of battleships. The Imperial flagship was a different matter entirely, though; this immense craft loomed out of the clouds towards Orta, looking somewhat like a flying castle kept aloft on Ancient antigravity engines. A huge golden statue was mounted on top of the flagship, and this mechanised sentinel opened fire on Orta and the Wormriders, catching Mobo’s baldor with a laser blast; to Orta’s horror, the creature and its rider plunged out of the sky.

With Imperial ships whirling through the air around her, Orta had little time to mourn the loss of her friend, and as she raced alongside the deadly flagship the Empire concentrated all of its fire on her dragon; the creature was not only targeted by guided missiles, but Orta was pursued by experimental battleships that were designed to reflect the dragon’s lasers. Knowing that she had to try and attack the flagship itself, Orta blew a hole in the hull of the craft and swooped inside. In the gloom of the craft’s interior, she found herself staring at hundreds of inactive dragonmare embryos, hanging in lines on rail after rail; creatures that would have been alive if Abadd had not deserted the Empire to follow his own mysterious plans. 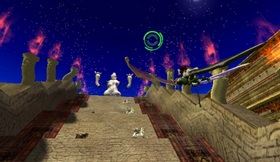 The pair heads towards the statue.

Blasting her way out of the ship’s interior once more, Orta flew over the flagship’s upper deck towards the lethal guardian statue, all the while dodging its deadly laser blasts. During her battle with this mechanical guardian though, Orta overheard something shouted by one of the Imperials operating the statue, and although his words were evidently no secret to the Empire they were a terrifying revelation to her:

She’s only a Drone! Show no mercy!

Not knowing what to do or think, Orta annihilated the great statue, but as it exploded and broke apart the reality of her situation and her life began slowly to dawn on her. She was really a drone like Abadd, it seemed: a creature of war and terror, whose body was a key capable of unlocking the mysteries of the Ancient Age. This was why the Seekers had kept her sealed away for so long, and this was why the Empire was pursuing her without rest; at that moment of realisation, Orta’s future seemed dark indeed.

Orta was not given time to reflect upon her fate though, as at that moment Evren’s dragonmare squadron came tearing out of the open sky towards her. Evren cursed the drone that had decimated the Imperial fleet, and it seemed that she was willing to capture Orta alive or dead; all five dragonmares pursued Orta as she fled into the clouds, spewing fire and lasers at her dragon, and ramming the creature with their huge bodies. Struggling to stay alive, Orta blasted the dragonmares’ projectiles out of the sky while her dragon concentrated its own lasers on the attackers. Although the dragonmares were among the most powerful weapons that the Empire had ever wielded, they could still not overcome the power of a true dragon, and as the battle wore on the dragonmares began to plummet one by one out of the sky.

In the end only Evren remained, her dragonmare wounded beyond repair; she realised that she herself would not survive this encounter, and, rounding on Orta, she was determined to take the drone with her into death. Evren activated the self-destruct device of her dragonmare, and began to laugh as the creature pulsed with light; as Orta and her own dragon were so close by, they could not help being caught in the blast.

The next sensation that Orta felt was a great cold, although it seemed that it was not the coldness of death; opening her eyes, she found herself immersed in deep snow, with heavy snow-laden winds whirling around her. Panicking, Orta squinted at the desolate landscape, looking for any trace of the dragon; it was not long before her eyes found a dark shape not far away from her, half submerged in the snow. 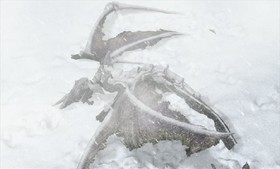 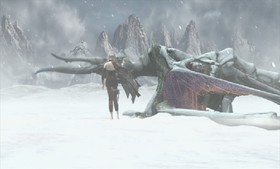 Orta struggled towards the dragon, but the creature did not move; she was confused to see the dragon like this, so weak and powerless. Since the day of her escape, the dragon had always protected her from the dangers of the world, and it had seemed all but indestructible; now she realised that it was not.

Suddenly, the dragon opened its eyes and looked up at her. Its body was greatly damaged from the explosion, but the creature made the effort to rise, shrugging off the snow and fragments of its own shattered armour. Although the dragon’s wings had been torn through so that it could no longer fly, the creature took Orta on its back again, determined to help her continue her journey even though it was now bound to the earth, running on through the falling snow.