Still finding no trace of Abadd, Orta and her dragon continued to wander alone across the face of the bleak and hostile world. They eventually found themselves flying over an area known as the Sea of Ash, one of the most desolate landscapes imaginable; instead of sand, this was a desert of grey dust that stretched out as far as the eye could see. Whatever once stood there had been burnt away to nothingness, with only a few scattered ruins remaining.

The pair enters a desolate area.

It was in this place that Orta had her first encounter with the pure-type monsters of the Ancient Age, the living weapons that still carried out the commands they were given so long ago. Several small pure-types, a species known as sebas, burst out of the ash-covered ground and attacked Orta and the dragon as they made their way forwards. Although she was able to overcome these flying guardians, they were far more aggressive and powerful than the wild, mutated monsters that Orta had previously encountered; this place had clearly been an important site in the Ancient Age, before it was all but wiped from the face of the planet.

Shortly after Orta’s first encounter with the pure-types, Mobo and a group of other Wormriders swooped into view, and to Orta’s surprise they proceeded to attack her; apparently Mobo had left before so that he could find reinforcements. Orta had no chance to explain that she was an enemy of the Empire too, rather than an Imperial soldier as Mobo believed, so a fierce battle ensued. The Wormriders were quick to realise that they could not compete with the power of the dragon, however, so it was not long before they wisely surrendered; realising that Orta was not an Imperial after all, Mobo apologised for his rash decision, and offered to help her out of the dangerous region that they were now in.

Mobo apologizes for the attack.

Orta followed Mobo down into a great fissure in the earth, and they travelled through a subterranean area where many more Ancient guardians lurked. When they emerged once again onto the surface of the ash desert, where the sunlight came filtered through the grey dust in the wind, Orta found herself flying through the remains of a city many thousands of years old; whatever disaster befell this place had evidently been terrible, as the city had been reduced to a collection of blackened ruins poking through the ash, the buildings charred beyond recognition. 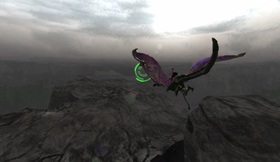 A broken bridge extends over the massive crater.

Beyond the city, Orta’s dragon flew out over a crater so vast that she could only vaguely see the other side of it in the distance - a place known only as “the Epicenter”. As they flew on, Mobo and Orta began to talk of Abadd, who the Wormrider had some general knowledge of. He explained the nature of drones to Orta, telling her that they were humanoid bio-engineered creatures created by the Ancients; he also revealed that Abadd had helped the Empire create the dragonmares in the first place, and that those creatures had ended the lives of countless Wormriders.

The Wormriders’ den was just beyond the Sea of Ash, but before Orta and Mobo could reach it they had to pass through another section of the sprawling ruined city. As they flew over these quiet ruins though, their presence awakened an enormous monster called a catharp, a vaguely human-shaped bio-monster that the Ancients had created as a soldier for their terrible wars. Bounding along on all fours, the Catharp pursued Orta and Mobo savagely through the ruins, spewing all manner of lasers and missiles at them; in her most difficult battle yet, Orta was forced to confront and overcome this vicious creature. It was only after a long struggle that the Catharp, which had reared up onto its hind legs in an almost human-like manner, staggered and fell lifeless into the dust. 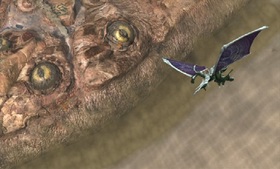 The Wormriders' den was situated on top of an enormous lathum.

Beyond the Sea of Ash was another desert, but one which was far more welcoming by comparison; here, golden sand dunes stretched out endlessly beneath a clear blue sky. Orta was surprised to find that the Wormriders’ village was actually built upon an enormous airborne monster, known as a lathum; this massive ray-like creature spent its life drifting over the sands, and it was accompanied by a pair of smaller baby lathums. When Orta arrived at the village, Mobo introduced her to Elder Ponta, the leader of his tribe.

The old man sat on a throne mounted on top of a baldor, and he was intrigued by the strange guest that Mobo had brought before him. Looking into Orta’s eyes, old Ponta sensed the girl’s restless anger, and he asked her plainly why she hated the world so; in reply, Orta recounted her past to him, telling him how the Seekers had kept her imprisoned all her days, how they said that she would be kept locked away until she was “needed for war”, whatever that may have meant. Orta had never known what it was to have a family, or friends; for as long as she could remember, she had been truly alone in the world.

Unlike the Seekers and the Empire though, the Wormriders had no intention of treating Orta with cruelty; after hearing the girl’s story, Elder Ponta invited her to stay with the tribe in their village, an offer which she gladly accepted. During those days that she spent with Mobo and his people, Orta came to know friendship and affection for the first time. Because of the Wormriders’ kindness, she began to realise that the world did not have to be so terrible after all.