Orta tried to keep up with Abadd for some time, but she eventually found herself alone in the vast Forest of Mutation. While flying along the great river that ran through the verdant lands, Orta suddenly noticed three baldors - airborne bio-engineered creatures - travelling alongside her, each of which carried a group of human riders. These people were the Wormriders, a strange tribal culture that lived in the Borderlands; rather than shunning the monsters of the world, the Wormriders co-existed with them, riding certain beasts - like the baldors - and hunting others for their food. When Orta first spotted this Wormrider group, they were chasing a huge amphibious creature called a yondo-worm. 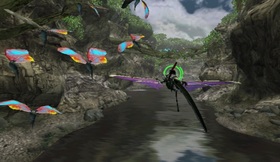 Orta enters the Forest of Mutation.

Having lost all trace of Abadd, Orta had nothing better to do than follow the river along its winding course; many aggressive monsters emerged from the forest to attack her as she passed, but with the dragon’s aid she managed to fight her way onwards. Eventually Orta caught up with the Wormriders again, but this time it seemed that the yondo-worm had become the hunter, and they the prey; a second enormous worm had joined the first, and the Wormriders could do nothing but flee from the enraged creatures. Orta and her dragon could not escape so easily though, as dense branches and thick foliage enclosed the river on all sides of them; Orta was forced to fight the Wormriders’ battle for them, but with the power of the dragon she was able to prevail. 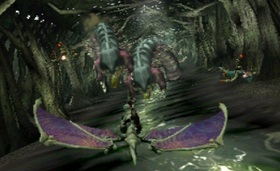 The pair is forced to fight the enraged yondo-worms.

When the dragon emerged from the gloom of the trees, Orta found that she was flying alongside a high cliff face; on her left, waterfalls tumbled down to an endless forested land that stretched out far below, where the river continued to wind lazily along. This peaceful moment did not last long however, as every part of the Forest of Mutation was full of life; yet more wild monsters swooped alongside Orta’s dragon and attacked her as she headed ever onwards.

Orta eventually dived down towards the lush forest below, following a waterfall that plunged over the cliff face; at its bottom Orta found the river again, and chanced across one of the Wormriders that she had seen before. After giving up on the yondo-worm, this Wormrider - whose name was Mobo - had apparently decided to hunt a huge plant-like monster known as an ikrakav, which he was following down the river. When Mobo noticed Orta, he called out to her, asking her if she would help him defeat the massive creature; and as she saw that he would probably not succeed if left alone, Orta swooped in to fight alongside him. Although the ikrakav tried to violently fend off Orta’s dragon and Mobo’s baldor, it was eventually subdued, and its inert body began to sink into the waters.

An ikrakav travelling down the river.

However, in the calm after the battle, Mobo took a closer look at Orta and his opinion of her suddenly changed; perhaps he had previously thought of her as another Wormrider, riding some extravagant kind of bio-engineered creature, but as he eyed her dragon more carefully he became convinced that she was an Imperial soldier, riding atop a lethal dragonmare. Mobo quickly fled the scene, abandoning the carcass of the ikrakav and leaving Orta alone once more. 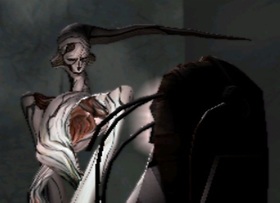 While Orta had been struggling through the Forest of Mutation, Abadd had been occupied with his own concerns, and he had made his way to a lost facility of the Ancient Age. In the middle of a vast chamber, the drone interfaced with age-old technologies in an attempt to initiate some kind of “resuscitation program”; it seemed that Abadd’s millennia-spanning mission was to awaken his Ancient masters, whoever those mysterious individuals may have been. However, the resuscitation program could not be carried out. Abadd was faced with the truth that his masters could no longer be resurrected, and that he would never be able to complete the objective given to him so long ago; he was entirely alone. Unable to accept failure, Abadd now turned his attentions fully to a different course of action: although his creators could not return to the world, Abadd would find a different way to fulfil their vision.