Chapter 1: A City in the Storm

Yelico Valley nestled between the dark mountains in the western lands of the Continent; in that sheltered and secluded place, the hidden society known as the Seekers had seen fit to build one of their largest cities. It was there that Orta, a mysterious young girl who knew nothing of her origins, had been imprisoned for as long as she could remember. 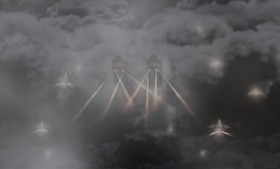 The Imperial army descends through the clouds.

The Imperials had learned of this hidden city, and not only were they eager to unleash the lethal dragonmares against their old enemies the Seekers, they also had an unusual interest in capturing the young Orta. It was under the cover of night, and shrouded by a violent storm that raged over the lands, that the Imperial army finally descended towards Yelico Valley. Surrounded by lesser ships, the massive Assault Carrier Vermana slowly opened its docking bay doors to reveal the five prototype dragonmares, whose riders were already suited up in their heavy battle armor. Once they were released into the open air, the dragonmares quickly dived into the valley to spearhead the Imperial attack. 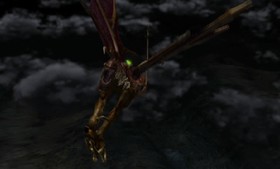 The dragonmares spearhead the attack.

The Seekers had spotted the fleet, and their searchlights already lit the sky so as to give their gunners a better chance at downing the incoming ships. However, it soon become obvious that nothing could have prepared them for the weapons they now faced; when the dragonmares entered the city, they easily tore through the Seekers’ simple defences. Green light glowed in the creatures’ throats as they breathed forth balls of energy that caused devastating explosions as they impacted the buildings. It was only a matter of minutes before the city was engulfed in flames. 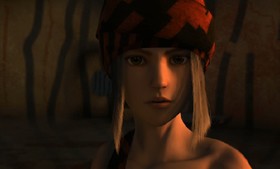 Orta watches the battle from within her cell.

Orta watched the battle from the small window of her cell, which was located at the highest point of a thin stone tower. One of the pilots spotted this prison, and quickly informed Captain Evren, the leader of the dragonmare squadron. Evren immediately ordered the other riders to move in on the target; the dragonmares easily smashed through the prison’s stone walls, and Orta found herself surrounded by the monstrous creatures, with no chance of escape.

Although everything seemed to be going according to plan for the Empire, they were about to discover that their dragonmares were not the only dragons left in the world. A bright cluster of blue laser fire raced towards the prison, and blasted one of the dragonmares away from the tower. The shot was fired by what appeared to be a dragon of the Ancient Age, a creature that was considerably smaller than the grotesque dragonmares, but which was apparently able to stand up to them. This dragon landed close to Orta, and it was not long before she realised that this creature had come to help her. She climbed onto the dragon’s armoured back and it quickly made its escape, with the dragonmare squadron in close pursuit. 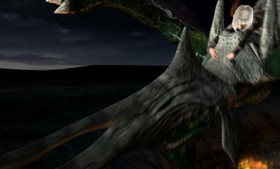 The dragon rescues Orta from the Empire.

Evren was intrigued by the sudden appearance of a genuine dragon, a creature that had not been seen since the Great Fall so many years ago. She gave the order for all Imperial forces to attack the creature as it fled through the canyons of the burning city, but these ships were unable to stop the determined creature. Still chased by the dragonmares, Orta and her dragon escaped into a narrow underground waterway where the huge beasts were unable to follow; several small fighter ships pursued them into the tunnels, but these were no match for the dragon’s lasers.

When Orta’s dragon emerged into open air again, she found herself facing the Assault Carrier Vermana itself. The ship had become separated from the lethal dragonmare squadron but, realizing that the dragon might escape with Orta, the Vermana’s Captain was determined to subdue the creature. However, it seemed that Orta was not about to run away from this battle.

The Vermana is no match for the destructive power of the dragon.

The conflict was brief but fierce, and when the Vermana’s core took heavy damage the ship began to sink heavily towards the ground. Orta was not safe yet, however, as the dragonmare squadron had at last caught up with her; they surrounded her dragon, and were about to open fire at Evren’s command when something suddenly shot past them. A different dragonmare, coated in distinctive white armour, slowed and turned to face the group; the rider of this creature was clearly not human, as his body was coated in a white shell-like substance, making him look like a walking relic of the Ancient Age. Evren immediately recognized the figure as Abadd, the drone who had mysteriously disappeared along with the final completed dragonmare, which he had evidently greatly enhanced; Abadd proceeded to open fire on the Imperials, and as his dragonmare was both better armed and better armoured than the five Imperial dragonmares combined, Evren ordered her squadron to retreat. 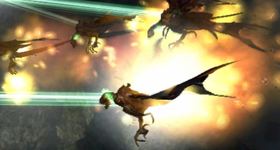 The dragonmares are forced to retreat. 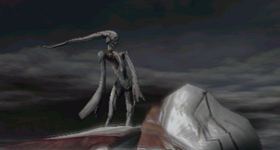 In the silence that followed the battle, Orta and Abadd were left alone. Cryptically, the drone told Orta that he knew who she was, and that he also knew her destiny: she would save the world from itself. Orta did not understand what Abadd meant, and when he swept away into the night atop his white dragonmare, Orta asked her dragon to follow him.

In the aftermath of the battle, the Empire evaluated the outcome of the attack on Yelico Valley. Following their retreat, Evren’s dragonmare squadron again went in pursuit of Orta and Abadd, although they were unable to catch up. Even though the Empire had failed to capture Orta, the destructive capabilities of the dragonmares proved to be well beyond their expectations. Eager to start the mass production of these creatures, the Empire was still determined to find and capture Orta.